As a woman making her way in male-dominated careers, Jennifer Michaux, '08, has accumulated a long list of “first female” accomplishments. In March 2021, however, she snagged a big one when she was appointed chief of police for the city of St. Augustine. 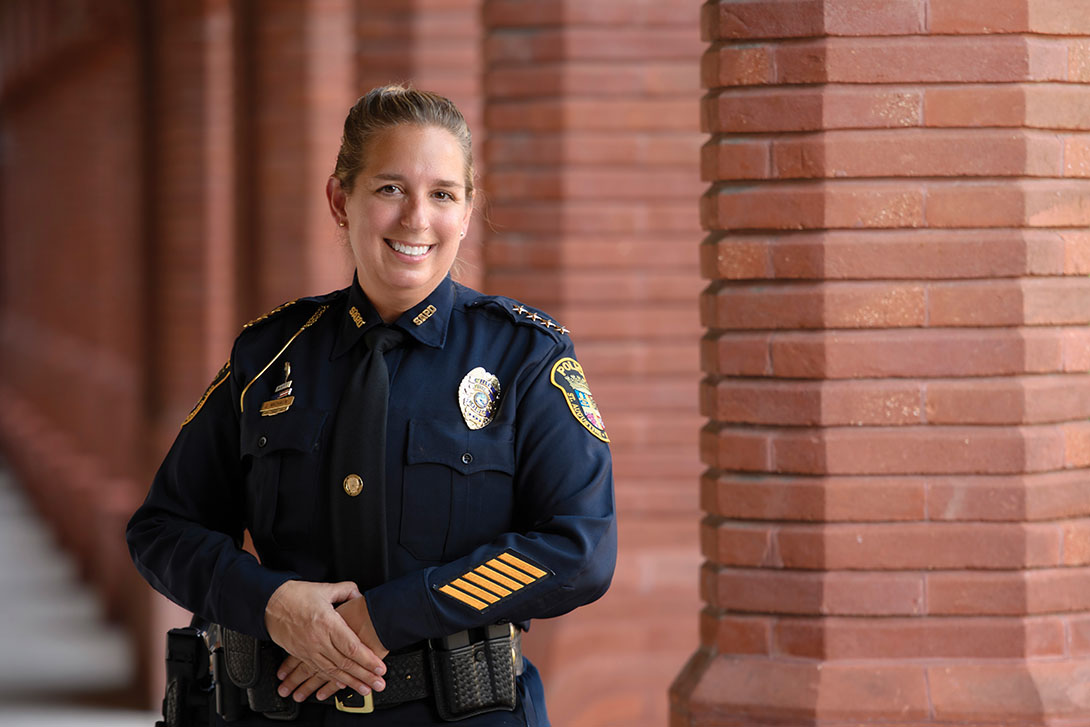 In uniform, Jennifer Michaux, Chief of Police for the city of St. Augustine, poses near the Ponce Hall pillars

She was the first female to assume that role since it was established in the 1880s.

“It's exciting … nerve-racking,” Michaux said. “As a woman, we put so much stress on ourselves because we always want to do good. We never want to let anybody down.”

Always looking for the next challenge, though, her aspirations eventually led her to the upper command staff in the St. Augustine Police Department. Since a four-year degree is required for those roles, Michaux turned to Flagler College for her education and graduated in 2008 with a degree in Public Administration.

“Besides the availability of the Public Administration program, Flagler College being right here in my hometown was a great opportunity for me,” she said.

“It's very rare that you find a public administration degree at the undergraduate level,” Bolante said. “I think that's what makes our program unique.”

Of course, the entirety of Michaux's experience and training led her to the top leadership role in the St. Augustine Police Department. Training in the U.S. Navy, on-the-job training at the St. Augustine Police Department and mentoring from respected superiors all contributed, but Michaux says she “continually uses” some knowledge gained in the program.

Michaux is now one of three Public Administration alumni who have recently taken the helm of local law enforcement agencies. In November 2020, Robert A. Hardwick was elected sheriff of St. Johns County after serving for 11 years as chief of police for the St. Augustine Beach Police Department. To take his place, another Public Administration program graduate, Daniel Carswell, was appointed in April 2021.

“It's a wonderful feeling,” Bolante says. “I know all three of them very well, and they are all very bright people. It just makes me proud to see them succeed.”