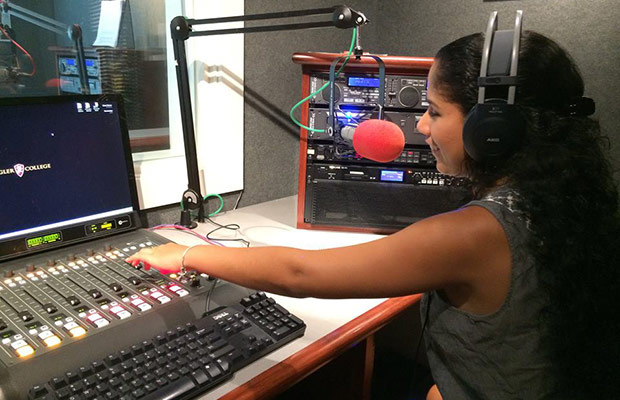 WFCF 88.5 FM, Radio with a Reason, is a non-commercial, educational radio station staffed by students in the Flagler College Communication Department and community volunteers. WFCF was founded to provide a source of quality radio programming for the greater St. Johns County area and to provide a superior learning environment for students majoring in broadcasting at Flagler College. The station operates 24 hours a day, seven days a week.

Skills You Will Learn at WFCF

WFCF erected its own tower on Dobbs Road in November 2003 which upped the station's transmission wattage to 10,000. The coverage area also was affected, extending it south to Volusia County and west to Interlachen. The fringe area includes Port Orange to the south and near Gainesville to the west.

Take WFCF 88.5 FM with you everywhere you go. Download the iHeartRadio app to your mobile device.

The establishment of the WFCF endowment fund supports the programming and operational needs of WFCF, Flagler College Radio, Radio with a Reason.

donate to the WFCF endowment fund

The WFCF staff welcomes and encourages comments, questions, and suggestions from its listeners. To post a public service announcement or to receive more information about the station, E-mail wfcf@flagler.edu. Businesses interested in underwriting WFCF and receiving on-air credit should contact Director of Underwriting Don Runk at (904) 501-0954. Due to the volume of mail received, WFCF does not respond to inquiries over the internet from musical artists. The process for getting airplay is to submit your music directly to the station. Email downloads to wfcf@flagler.edu