The Historic St. Augustine Research Institute announces the William L. Proctor Award for outstanding research and writing at the undergraduate and graduate level on the history, archaeology, and historic architecture of St. Augustine. The Institute will award the William L. Proctor Prize in the amount of $1000 and such other smaller prizes in the discretion of the Institute. This is a juried competition.

William L. Proctor, Ph.D. is the chancellor of Flagler College. For thirty years he served as president of the college; he has also served as a member of the state of Florida State Board of Education and a member of the Florida House of Representatives. He is currently the President of the St. Augustine Foundation, Inc., the funding agency for the Institute.

The Institute is a collaborative project of Flagler College and the University of Florida. Its purpose is to encourage, coordinate and disseminate active academic research related to the history, archaeology and historical architecture of St. Augustine, Florida, and to apply this research in support of historic preservation in the city. 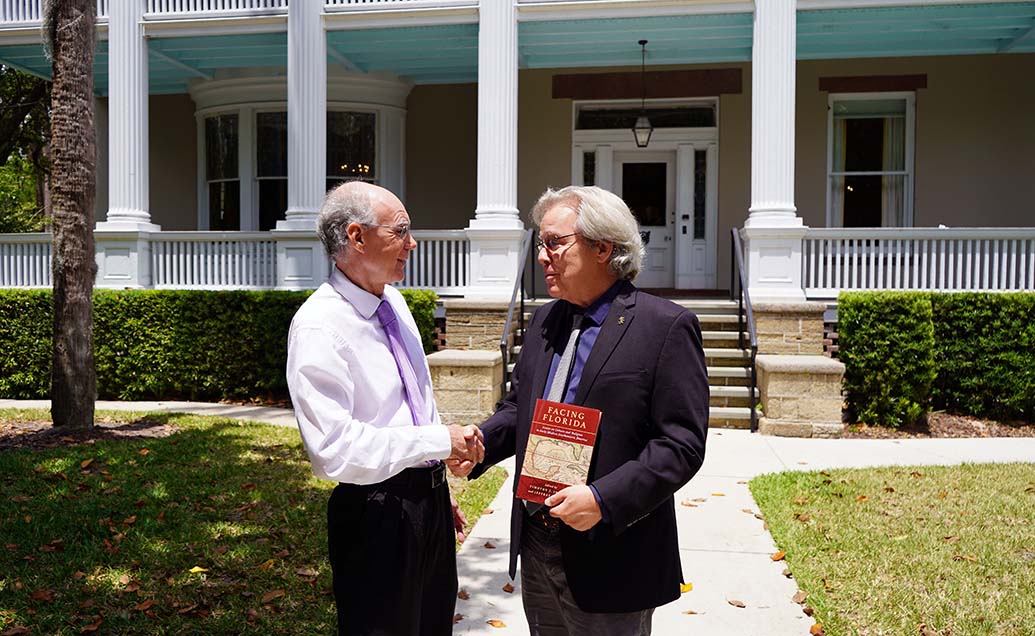 The Historic St. Augustine Research Institute (HSARI) recently awarded its annual William L. Proctor award to Dr. Timothy Johnson and Dr. Jeffrey Burnes for an edited volume and scholarly contribution on the history of St. Augustine: Facing Florida: Essays on Culture and Religion in Early Modern Southeastern America, University Press of Florida, 2021. This is a juried award competition for books and monographs about St. Augustine in the areas of history, archaeology, and architecture, published in the previous year.

HSARI Chair, Dr. James Cusick described Facing Florida as an example of outstanding and ground-breaking scholarship in all areas pertaining to colonial Spanish Florida and St. Augustine. Cusick further shared “the Research Institute is delighted to recognize it, along with the previous volumes produced in this series.”

The award was presented to Dr. Johnson at the annual HSARI luncheon held on May 6th in the Markland House at Flagler College.

Johnson shared, “I was honored to receive the William L. Proctor Award for the co-edited volume Facing Florida today. This is the third volume emerging from a series of conferences at Flagler College supported by the college, the Academy of American Franciscan History, and other organizations. I want to thank the Historical Saint Augustine Research Institute (HSARI) for this award, Jeffrey M. Burns (co-editor), and my amazing colleagues who contributed to this interdisciplinary volume.”

Dr. Timothy J. Johnson is the Craig and Audrey Thorn Distinguished Professor of Religion at Flagler College. He received his Doctorate in Sacred Theology from the Pontifical Gregorian University (Italy). He came to Flagler College in 1998. A Senior Fulbright Scholar and Chair of the Research Advisory Board of the Franciscan Institute, he has held visiting fellowships at Cambridge University (England), Dresden University (Germany), and Eichstätt-Inglostadt University (Germany). He has been invited to be a visiting professor at the Pontifical Antonianum University (Italy), Saint Bonaventure College (Zambia), and Saint Bonaventure University (United States). Flagler College nominated Dr. Johnson twice for Carnegie Professor of the Year award.

This is one of two awards being made this year by the Historic St. Augustine Research Institute, the other being for a single-author work, which was awarded to Javier Á. Cancio-Donlebún Ballvé, for The King of Spain’s Slaves in St. Augustine, Florida (1580–1618), Estudios del Observatorio/Observatorio Studies, Instituto Cervantes at FAS - Harvard University 2021. 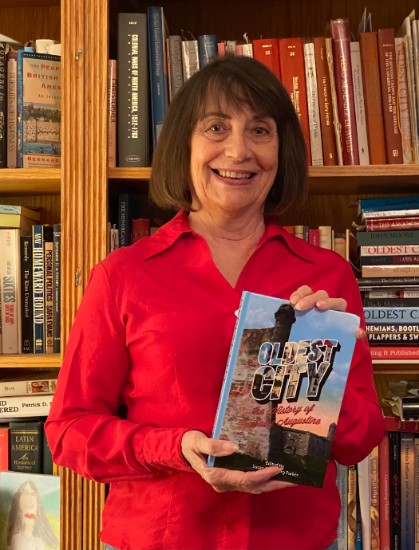 HSARI hosts this juried award competition for writing focused in the areas of history, archaeology and historic architecture related to St. Augustine.

HSARI Acting Chair Dr. James Cusick called Parker’s publication, “A work that will make a lasting contribution to knowledge and appreciation of the city and its legacy.”

HSARI is a collaborative project of Flagler College and the University of Florida, supported by the St. Augustine Foundation, Inc. Its purpose is to encourage, coordinate and disseminate active academic research related to the history, archaeology and historical architecture of St. Augustine, Florida, and to apply this research in support of historic preservation in the city.

The award’s namesake, Dr. William L. Proctor, said of Parker’s work and award: “I wish to extend my heartiestcongratulationsto Susan Parker as the recipient of the 2020 Historic St. Augustine Research Institute award that bears my name. Dr. Parker's contributions to the body of research on the history of St. Augustine warrant both commendation and appreciation. Her distinguished scholarship is most deserving of this recognition."

The book is a compilation of eleven authors’ work, all known for their research on various aspects of St. Augustine history. Some contributors weren’t able to see the book’s publication and subsequent recognition.

“We all miss our fellow authors, Eugene Lyon and Patricia Griffin. Dr. Griffin began this book project with us, but died before it was in print. Dr. Eugene Lyon lived to see his research published.

Due to the pandemic, HSARI wasn’t able to recognize Parker for her unique role in bringing together the foundational research into one volume. Under normal circumstances, she would have been celebrated with a luncheon with other HSARI researchers.

“I am, of course, honored to be chosen for the William L. Proctor Prize and, as such, to be part of a list of distinguished researchers who have so enhanced our understanding of St. Augustine's past. This honor belongs not just to me, but to all eleven authors, whose knowledge is offered in “Oldest City,”said Parker. 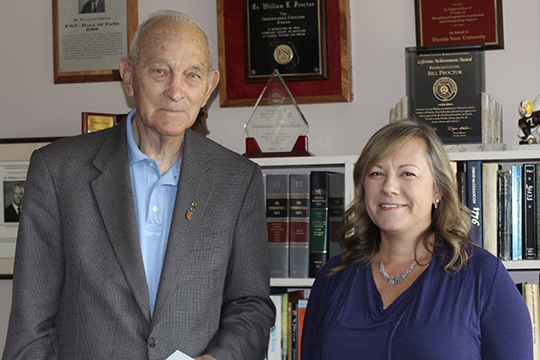 The Historic St. Augustine Research Institute, a group that contributes to local historic preservation efforts, have awarded their annual William L. Proctor award of $1,000 to Dr. Denise Bossy for her most recent book, “The Yamasee Indians From Florida to South Carolina” (University of Nebraska Press, 2018) for its outstanding scholarly work pertaining to the Yamasee Indians. HSARI hosts this juried award competition for writing focused in the areas of history, archaeology and historic architecture related to St. Augustine.

The award’s namesake, Dr. William L. Proctor, was appointed the president of Flagler College in the spring of 1971. He served in that position until his appointment as chancellor, a position he currently holds.

Bossy is an Associate Professor of History at the University of North Florida, where she has been on the faculty since 2007. She received her Ph.D., M.Phil and M.A. in American history from Yale University and her B.A. in history from Princeton. She has held fellowships and grants from the National Endowment for the Humanities, American Historical Association, American Philosophical Society, Mellon Foundation, John Carter Brown library, three institutes at Yale University and UNF.

Both her research and courses focus on the early South, especially the Native South and Indigenous Florida. She places special emphasis on teaching American Indian history as local, public, and southern histories. She also works with local museums and parks in Northeast Florida to improve their American Indian programming. In Fall 2018, she published the anthology “The Yamasee Indians: From Florida to South Carolina,” which grew out of a conference that she organized with archaeologist Chester DePratter at Flagler College in 2015. She is the author of many academic book chapters and articles, having received the John Murrin Prize and Malcolm C. Clark Award for them. She is currently completing the first monograph on the Yamasee Indians from their Mississippian roots to the late eighteenth century.

One jury panel member said, “The authors have done an amazing job of showing how much richer and balanced colonial history can be when you build up a picture of the past based on what indigenous people were doing.”

Overall, the panel decided that the narrative presented on the Yamasee Indians and their contributions to shaping the southeast during the colonial period was much needed and therefore, deserved their recognition. The book explores the Yamasee successes in a blossoming St. Augustine, as well as their struggles, and the often-fractured relationship between the mission system of Florida and its English neighbors to the north. The HSARI panel also noted that this recognition of work is attributed to all of the book’s contributors.

“By placing Yamasees and other indigenous people at the center of our stories, we put them back where they were,” said Bossy. 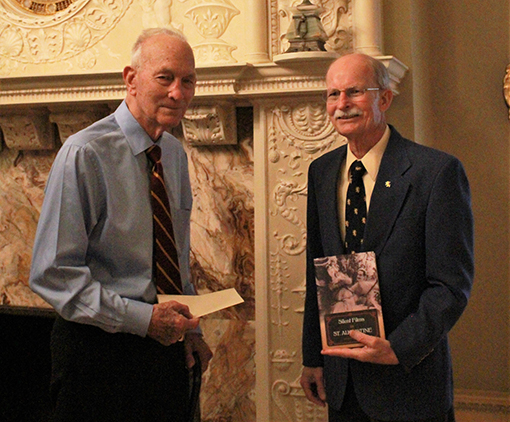 The Historic St. Augustine Research Institute, a group that contributes to local historic preservation efforts, have awarded their annual William L. Proctor award of $1,000 to Dr. Thomas Graham for his most recent book, “Silent Films of St. Augustine” (University Press of Florida). This is a juried award competition for writing at the undergraduate level and above in the areas of history, archaeology and architecture.

The award’s namesake, Dr. William L. Proctor, was appointed the president of Flagler College in the spring of 1971. He served in that position until his appointment as chancellor, a position he currently holds.

“Silent Films of St. Augustine” explores the time period of 1906 – 1926 when Graham says more than 120 silent films were shot in town, a location mostly overlooked by the history books.

“Jacksonville ranked first as Florida’s movie venue,” said Graham. “But just thirty-five miles to the south lay St. Augustine…the colonial stone houses, narrow streets, and exotic architecture provided ready-made backdrops for making scenes supposedly set in Spain, France, Italy, and even India, China, and Hawaii. The ‘tropical’ surroundings of the town could stand in for African jungles, while the sand dunes of the beach became deserts of the Sudan.”

“Silent Films of St. Augustine” is available at most online and retail locations, including Flagler’s Legacy shop. 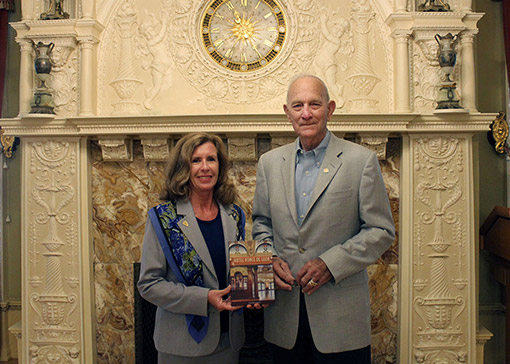 Keys is an assistant professor of history and director of historical preservation at Flagler College. Her book, published by the University Press of Florida, showcases the construction of Henry Flagler’s Hotel Ponce de Leon and its adaptive use as the centerpiece of the Flagler College campus. The book is the first to present the story of the preservation of the Hotel Ponce de Leon and to address the topic in the context of St. Augustine’s history from the preservation of the City Gate in 1827 through the Depression-era efforts to stabilize the city’s economy and up through St. Augustine’s 400th anniversary in 1965. The book’s peer reviewers included Dr. Meredith Arms Bzdak, Principal, Mills & Schnoering Architects, Princeton; Dr. Ted Ligibel, Executive Director, Historic Preservation Program, Eastern Michigan University; and Dr. Les Standiford, Director, Creative Writing Program, Florida International University. Keys was also recently recognized with the Roy E. Graham Award for Excellence in Historic Preservation Education from the Florida Trust for Historic Preservation. At Flagler College, she has been closely involved with preservation efforts over the last decade on the campus.

Gordon’s book, “Walking St. Augustine,” was also published by the University Press of Florida. It provides readable information from scholars regarding St. Augustine’s history and architecture. It features easy-to-follow maps of walking tours through neighborhoods of the colonial city. The book’s publication in color was made possible through the generosity of University of Florida Historic St. Augustine and the St. Augustine Foundation, Inc. Gordon is an architectural historian living in St. Augustine. She is also the author of “Florida’s Colonial Architectural Heritage” and “Heart and Soul of Florida: Sacred Sites and Historic Architecture.” Gordon designs her research and writing to see the city through the eyes and times of those who lived and worked in St. Augustine through the centuries, as well as those who are today passionate about protecting the historic city’s past and future.

The Historic St. Augustine Research Institute, funded by the St. Augustine Foundation, was established in 1999 as a cooperative organization between Flagler College and the University of Florida to promote original research on the history, archaeology and architecture of St. Augustine and its environs. The Institute’s goal is to spread scholarly knowledge to the general public, and in support of this mission, the William L. Proctor Award was established in late 2015, and this is its inaugural year of awards. Proctor is chancellor of Flagler College, and former president of the college.

Maize in the Political Economy of Spanish St. Augustine

Rules of the competition