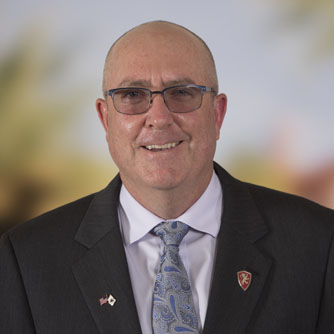 Professor, Dean of the School of Business, Education, and Mathematics

Professor Sebastian earned his Ph.D. and Sc.M. from Brown University in Applied Mathematics, concentration in Numerical Analysis and Scientific Computing. He also earned his B.S. in Mathematical and Computer Sciences from the United States Coast Guard Academy. Dr. Sebastian assumed his responsibilities as Professor of Mathematics and Chair of the Department of Mathematics and Technology in August, 2015. Prior to that, he was a Professor of Mathematics at the U.S. Coast Guard Academy, where he taught for 21 years. Dr. Sebastian had two tours of duty at sea early in his Coast Guard career, one as Commanding Officer of the Coast Guard Cutter Point Arena. He retired as a Captain just prior to coming to Flagler College. Dr. Sebastian has experience in basic research, authoring peer-reviewed papers in Computational Fluid Mechanics and serving as a Fellow at the Institute of Pure and Applied Mathematics at U.C.L.A. working on "Grand Challenge Problems in Computational Astrophysics." He also has experience in applied research involving undergraduate students, directing numerous capstone research projects for senior level students at the Coast Guard Academy providing consulting work in Operations Research for various units throughout the U.S. Coast Guard. Dr. Sebastian is married to the former Anne O'Neill of Pawtucket, RI. They celebrate their 30th anniversary this May. Together they have one son, Nicholas, who lives in East Providence, RI. Nick was recently married to the former Morgan Harrington, also of East Providence, RI.