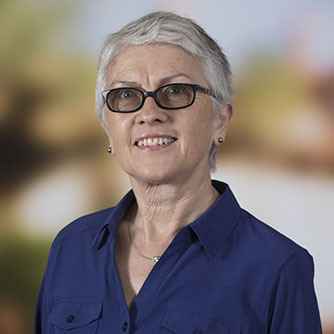 Professor Johnson holds a Master's degree in Spanish from Middlebury College, Vermont, and a B.A. degree in Latin American Studies/Spanish from Flagler College. She is also a graduate of Regina Mundi Institute, Rome, Italy. In addition, she has completed language study programs in France, Italy, and Spain. Professor Johnson brings a wide international experience and passion for languages to her classroom. She strongly believes that to learn successfully a language student must be challenged and immersed in language and culture. This believe led her to develop and direct many successful study abroad programs in Peru, Costa Rica, Mexico, and Spain.

For her dedication to the international education field in 2016, she was the single recipient of the Florida Association for International Educators Award “You Make a World of Difference”. Professor Johnson is also actively involved in research concerning the Franciscan presence in early Spanish Florida. Recently she co-directed an undergraduate student research project on the 1627 Catecismo of Francisco Pareja, which was presented at the 2016 summer International Medieval Sermon Studies Symposium at Flagler College. Her area of interest is Latin American Culture and Literature with emphasis on woman writers and short stories.