Uncovering Fort Mose’s history through the power of collaboration

Two programs at Fort Mose, spearheaded by Assistant Professor Lori Lee, are in the process of uncovering the site’s history. These opportunities offered students the chance to gain hands-on experience and collaborate in the field of anthropology.

Fort Mose is a state park in St. Augustine with centuries of history. Best known as a refuge for slaves in the early 1700s, the Fort Mose area was also home to ancient indigenous populations before that, as well as most recently, a homeless encampment. The site’s rich history has made it a source of archaeology and anthropology projects since 1986.

Lee brought Flagler students to join in on uncovering Fort Mose’s past. As part of FlagSHIP, the Flagler Sophomore High Impact Program, students had the opportunity to participate in a Maymester, a three-week term of intensive study. Lee’s class, called Local Anthropology: Culture and Community, enabled sophomores to study anthropological methods and explore the local community through the historical site of Fort Mose. The class focused on the theme of diversity and inclusion by examining diversity and exclusion in St. Augustine’s past. Part of the class involved searching for evidence of domestic structures at Fort Mose, where students received first-hand archaeological experience as they uncovered artifacts and features of the site. 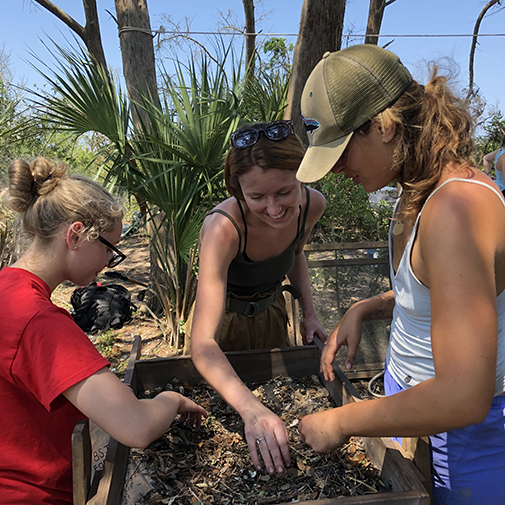 Overlapping with the final week of Maymester, Lee also held a field school at Fort Mose. The field school was a joint effort with Associate Professor James Davidson of the University of Florida. Flagler students were able to collaborate with UF students at both the undergraduate and graduate level. For the first week of field school, students from both programs were able to unite their efforts and work together.

As a result of Maymester and the field school, students discovered details of the past people who lived at Fort Mose. Some artifacts included a medicine bottle made during the occupation of the site and military objects like gun flints and lead balls, as well as a Native American tool made of bone. The oldest object they discovered was an archaic piece of native pottery, sherd, estimated to be 4,000-5,000 years old. Students also found features of domestic sites, including post holes and wall trenches that indicate former building structures.

Academic collaboration allowed student efforts to have an impact on research of the site. Lee’s ongoing project of reinterpreting history at Fort Mose opened the door to let students be part of the process. They were able to work together and offer their own contributions to scholarly research.

“It’s a great way to get students involved in ongoing research,” said Lee of these student programs. “Their contributions are very significant. In a three-week timeframe, you’re able to build on what’s come before and keep adding onto that.”

Even Lee has been building on the work of past archaeologists, like Dr. Kathleen Deagan, Distinguished Research Curator of Archaeology and Adjunct Professor of Anthropology at the University of Florida's Florida Museum of Natural History. Deagan has been working at Fort Mose since its first excavation in 1986, where the primary goal was to verify the location. Since then, archaeologists have been joined by the efforts of invested community members to uncover the site’s history. United by archaeology, members of all different backgrounds have come together to mimic the cultural blending of Fort Mose’s past, where Native Americans, free Africans and Spanish settlers once lived together.

“We’re finally catching up to the past,” said Deagan.

Lee intends to analyze her data and prepare reports to renew her permit and continue working at Fort Mose. The collaboration with UF is expected to last three years, while other projects have begun to manifest, like a possible maritime investigation of parts of the site that have gone underwater. Lee intends to work with alumna Alex Garrett, ‘19, on analyzing ceramics for a paper they will present at the annual meeting of the Society for American Archaeology in April 2020.

Sharing Fort Mose’s history creates a new narrative for black Americans, one of civilization rather than slavery. With archaeologists, students and community members invested, everyone is able to get more work done together. Each individual brings a different perspective to the table, creating a mix of expertise. By working together, we learn from the past about how we can shape our future.