Study Abroad in Germany: Examining the Protestant Reformation from a European perspective

This year marks the 500th commemoration of the Protestant Reformation, the 16th-century upheaval that redefined the Roman Catholic Church. This summer, Flagler College students enjoyed the unique opportunity to study the transformative period at the University of Dresden in Germany, as part of an interdisciplinary-transatlantic program titled “Faces of Faith: Late Medieval and Reformation Germany.”

“It was a really cool experience,” Flagler student Jennifer Vojt said. “We learned about (theologian) Martin Luther and the Reformation, and we visited different places around Germany that were influential during the Reformation.”

Vojt was one of 10 Flagler students from various majors who joined five University of Dresden students to study Luther and the Protestant Reformation from religious, political, social and historical perspectives. Day trips included visits to the most important sites of the Reformation, such as Wittenberg, Eisenach, Eisleben and Torgau.

“Working together with various professors of the University of Dresden, our students were able to explore this area of the former East Germany and study the profound impact of the Protestant Reformation on the city, the surrounding region of Saxony, and indeed countries as distant as the United States,” Johnson said.

The program is organized under the roof of the newly-established Centre for Medieval and Renaissance Studies (at the University of Dresden) and “aims to focus on the Reformation, its background and implications using an interdisciplinary approach.”

Johnson co-taught and led the seminar, which ran from May 15 to 31 and included courses such as “Martin Luther’s Life before 1517,” “Experience, Prayer and Theology according to Bonaventure and Luther,” and “Church Architecture, Decoration and Space from the Middle Ages to the Counter-Reformation.”

While the study abroad experience focused on an academic exploration of the Reformation, it also exposed students to diverse approaches to teaching and learning.

“This innovative and international teaching format not only gave students insight into the current European research landscape on the topic of ‘Reformation’, but also offered an opportunity to get to know different learning and teaching cultures,” said University of Dresden spokeswoman Jana Hoehnisch. “With the help of numerous exciting contributions from the different perspectives of the participating disciplines, students could complete a puzzle that considered the complexity of the Reformation, its implications, and its effects.

Johnson agreed: “This program allowed students to experience first-hand how other students and professors approach the texts and traditions they are studying.”

Vojt said she also enjoyed traveling to Prague with her fellow classmates and expanding her view of the world.

“(The experience) was hands-on and inspired me to continue learning about the Reformation while also fueling my desire to continue to travel in the future,” she said.

The international seminar was funded by the program "Study Internships" of the German Academic Exchange Service (DAAD) and Flagler College. You can read the seminar brochure here. 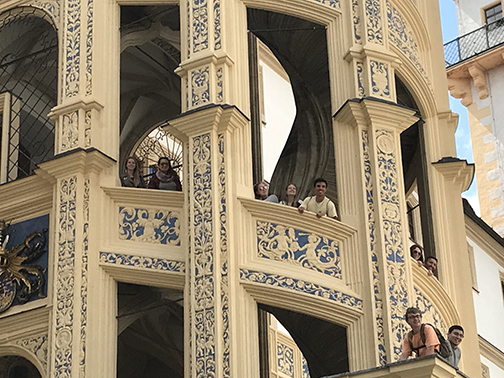 “During our visit, there was something personal going on within, to a point where I found myself looking at the subject from a cultural point of view. A different people, their history, their perspective, and this study abroad was allowing me to skim the cultural surface. All I could do was listen and read everything that was being taught about the subject matter.” — Student Abraham Saul 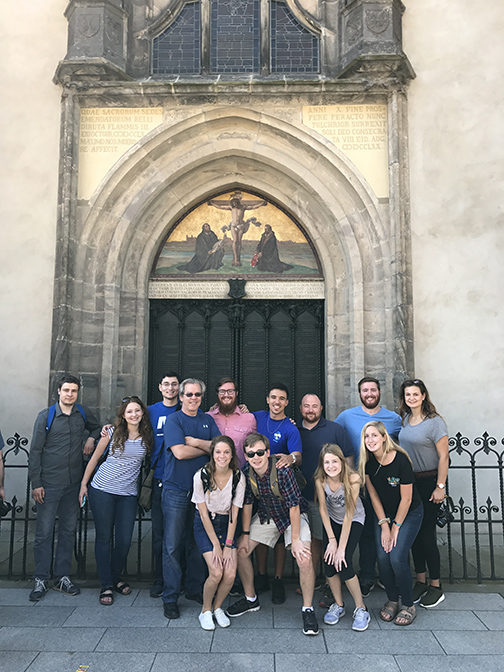 The Wittenberg Castle Church where Martin Luther is said to have nailed his famous "95 Theses."

“Not only were the areas we visited beautiful and captivating, but the people, history, and culture were as well. Being able to follow Luther physically, academically and spiritually through his journey 500 years later provided a wonderful insight as to what religion and the Protestant faith has become today.” — Student Rachel Bryant 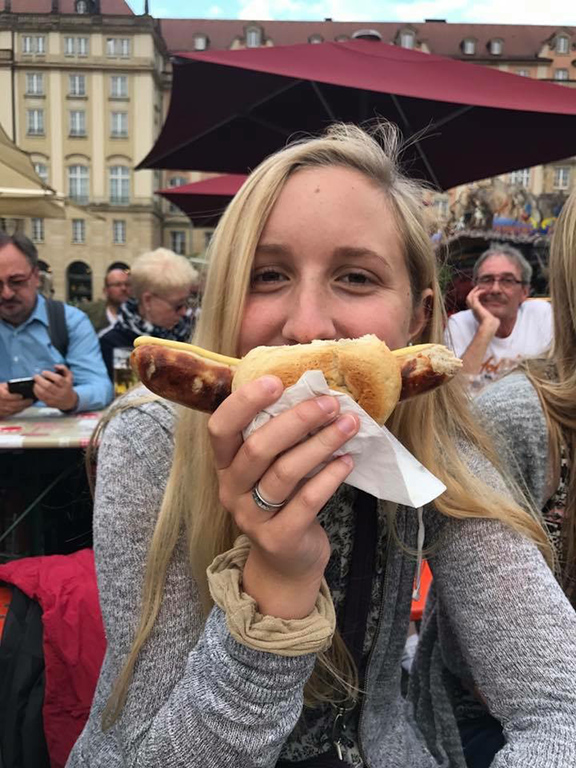