“I think it’s pretty interesting to see this kind of thing here,” he said. “This is one of the first oral arguments I’ve seen on the civil (not criminal) side. I’ve been to events before in the Flagler Room, but it’s never been as full of students. It’s pretty cool to have this here and watch the court process.” 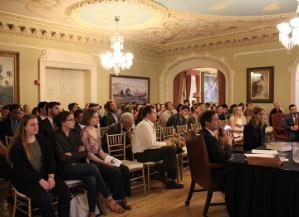 The Fifth District Court of Appeals is one of five intermediate appellate courts in Florida. It is headquartered in Daytona Beach and hears cases in the geographic area bounded roughly from St. Johns to Brevard counties on the coast and west to the Orlando area.  Periodically, the Court goes on the road to hold oral arguments, which are open to the public, at different places in the district; while they have held court at many other colleges and universities, this is their first visit to Flagler.

After the court sessions, the three judges had lunch with Flagler Law students and faculty at Markland House.