Managing disasters is not what Linda Stoughton envisioned she’d be doing 30 years ago. She had studied forestry, and wanted to pursue that field wholeheartedly. But in 1985, she took a job with St. Johns County as a fire rescue dispatcher, and before she knew it, had progressed to the role of emergency management director.

The county is lucky for it. Last year, her leadership skills were on full display during Hurricane Matthew, when she successfully organized and directed 200 volunteers at the county’s Emergency Operations Center (EOC), command central during disasters.

“We felt ready,” Stoughton said about the days preceding Matthew. “We had just done large-scale training in the operations facility and had a framework in place.”

Her role, especially during a natural disaster, is comprehensive to say the least. She’s in charge of setting up evacuations and sheltering, activating the county’s emergency plan and EOC, serving as a community spokesperson and FEMA liaison, ordering resources and organizing recovery efforts. 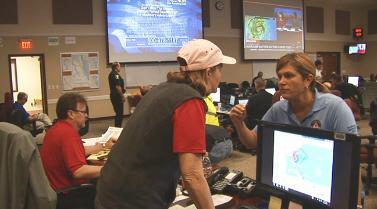 State officials noticed her ability to juggle the demands in the face of Matthew, and in May at the 31st Annual Governor’s Hurricane Conference, awarded her the Governor’s Award, the state’s most prestigious accolade for hurricane preparedness and response.

“I am quite honored and humbled,” Stoughton said. “I look at emergency management as a team sport. When we activate the EOC, it takes many of us to make the (emergency) plan work. The award is for all of us.”

In February, Stoughton was also named “2017 Emergency Manager of the Year” by the Florida Emergency Preparedness Association.

When the Flagler Public Administration grad reflects on Matthew, she recalls the moment the storm surfaced on her radar. She was in a training session the week prior with representatives from National Weather Service Jacksonville, who pointed out the blip on the screen.

“They said everybody better keep their eyes on it,” Stoughton said. “It was game on after that. We knew it was going to be serious for Florida.”

From an operations perspective, things progressed smoothly. The county was initially concerned about traffic mobility, given population growth over the years, but in the end, there weren’t long-term bottlenecks to thwart evacuation. But from an emotional perspective, the experience was more dramatic.

“Was it gut-wrenching?” Stoughton said. “Absolutely — especially when you saw photos coming out of the city.”

Those photos, coupled with videos posted online, turned an idyllic coastal town into a victim of nature’s wrath. Matthew, with its flooding and surge damage, was a water event, as opposed to wind events (like that of Hurricane Andrew). If there are any lessons to be gained from last year’s experience, Stoughton said that it is that fact.

“We have to communicate very specifically to our residents that all three bodies of water move — the Atlantic,  Intracoastal Waterway and St. Johns River,” she said. “They will all surge. We have to turn around. You will see us breaking that out this year. A lot of people said they didn’t know the Intracoastal was going to swell like that.”

The other lesson, she added, is to emphasize the importance of having an in-depth understanding of one’s insurance policy. Most people were surprised by policy details and the response timeframe.

As the county heads into hurricane season, while still in the recovery phase from last year’s epic event, Stoughton said she is ready, as is her entire team, with preparation plans and passion.

“Our job is to try to change the outcome of an event, to make it less painful for the community and protect property,” she said. “Those of us that work for the EOC put our hearts into it. We’re here to protect our home.”