Flagler’s newest class is mighty in numbers, talent and optimism.

Coming out of a high school experience interrupted by the pandemic, Flagler’s newest class is eager to savor everything college has to offer them. Among one of the most impressive groups Flagler has ever admitted, we are welcoming a boat captain, first-chair violinist, student veteran, track state champion and an enthusiastic new face to the deaf education program.

These students are just a glimpse into the largest and most academically talented class Flagler has welcomed to campus. 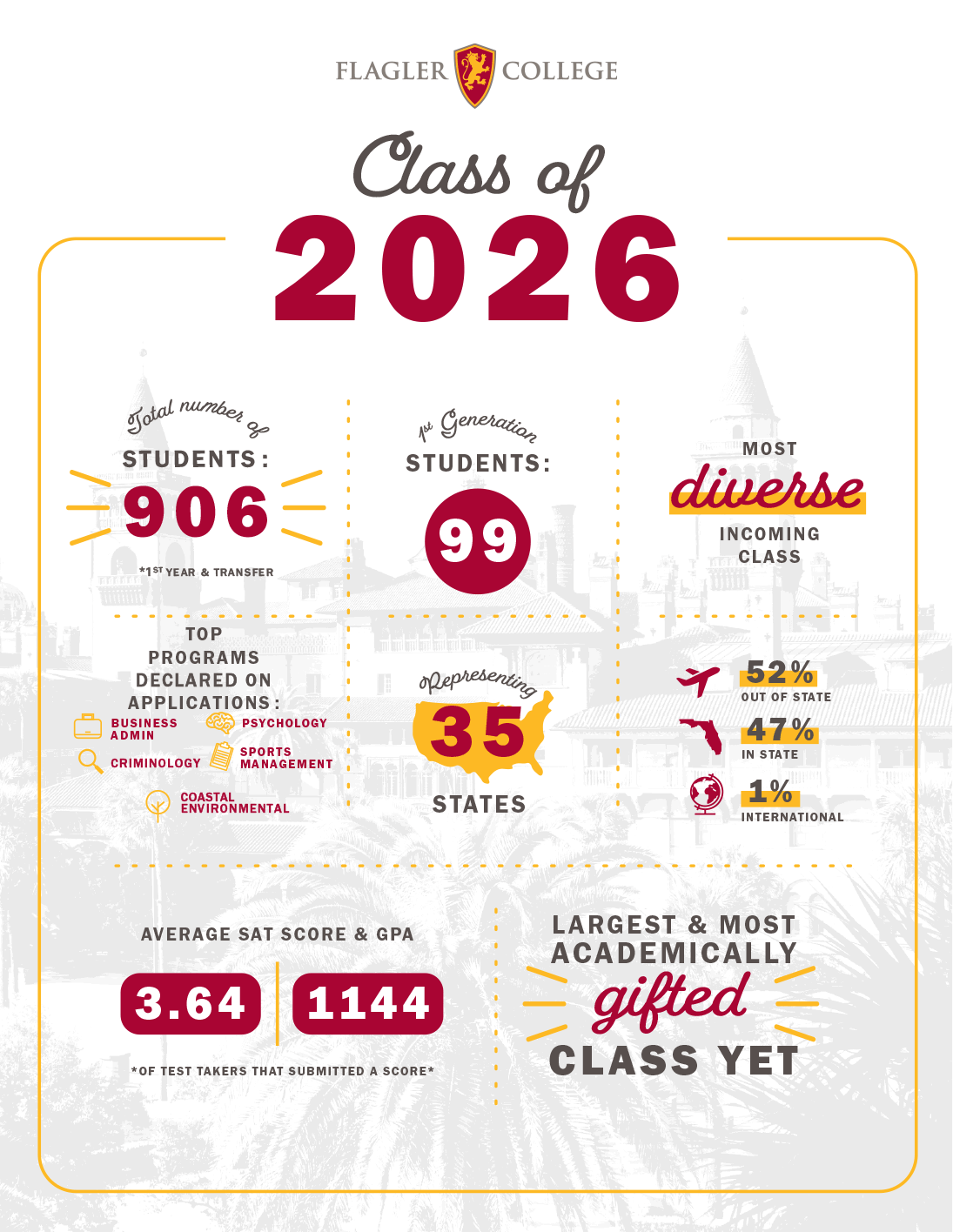 For Annabelle Hunt, Flagler was always the college she knew she was meant to be at.

She first visited the campus with her mom on a “girls trip” from their home in Somerville, S.C. At that point, she wasn’t aware of the deep ties Flagler has with deaf education.

Since her elementary years, Hunt has studied American Sign Language with inspiration and support from her late, former ASL teacher Ms. Sharon. And later, when a deaf teacher joined her homeschool co-op in high school, she became their teacher assistant and acted as an interpreter for the class.

“We walked onto the campus and I looked at my mom and I said, ‘mom, I want to go here,’” Hunt said.

It was the first time she saw the campus, but she’d grown up hearing her parents talk about it.

“It was funny because I grew up listening to my parents always talk about that one school with the Tiffany Glass windows,” she said.

When she did a little research and found Flagler’s deaf education program, she was completely sold.

“One of the most beautiful campuses on the face of the earth and my major exactly was a master's degree,” she said. “I mean, can't get it any better than that, really.”

Hunt is excited for what her future holds at Flagler and in St. Augustine. She said her plan is to work at the Florida School for the Deaf and the blind for a few years after graduation and then see where life takes her.

A couple nights a week, you’ll find Stephen Warnes captaining dinner boats and sunset cruises out of the St. Augustine Municipal Marina slowly down the intercoastal.

Warnes is more than a thousand miles from his home in Long Island, N.Y. where he captained a ferry boat to nearby Fire Island, but he said St. Augustine reminds him of home.

“I chose Flagler because this kind of feels like home,” he said. “I work in a place where there's no cars, just sidewalks, shops, restaurants, that kind of thing. So, the first time I was here, I walked around and it felt familiar.”

Warnes holds two U.S. Coast Guard licenses and hopes to utilize his finance degree to continue living out his passion on the water.

“I kind of want to find a field that combines finance with something to do with boats,” he said.  “I love being out in the water. So, anything to keep me close, that'll be what I strive for.”

After two gap years, Warnes is also ready to get a taste of the typical college experience.

For the first two years of her college career, Jessica Underwood was working through online community college courses while she served the military across the globe in places like Japan, Guam, Turkey, Uzbekistan, Jordan, Washington and Texas.

“I was overseas trying to do any kind of schooling I could cause I've always been eager to learn,” she said.

Underwood was deployed in Turkey when she applied as a transfer to Flagler. She said the fond memories of travelling with her family from Branford, Fla. to St. Augustine on vacation growing up and the positive experience her older sister had as a former student here weighed on her decision.

“[My sister] really enjoyed and all the different opportunities that she's had because of Flagler,” Underwood said. “I think it really kind of sparked an interest, a very big interest for me.”

“That’s kind of what makes transfer students so unique, you never really know where they have been or what their stories are.”

Underwood currently commutes to Flagler, but she plans on buying a house in St. Augustine soon and sticking around after graduating.

“It's beautiful. Every corner of your turn feels like there's a whole new story,” she said.

It was Flagler’s criminology program and the school’s core values that drew Jada Antley to the college, and in the first few weeks, it’s the people that she’s met that will make her first semester memorable.

“It feels like summer camp right now,” she said. “I mean, I know it's probably not like forever, but right now it's just so chill and everyone's so nice and we all get along.”

Antley, who was first chair violinist in her school orchestra and second chair in her district, was slightly disappointed that Flagler doesn’t have an orchestra. But she said she’s eager to get involved affinity groups related to diversity, equity and inclusion and try out the surf club.

Her first day, like any college student, was emotional. But she said she’s optimistic that this transition is a positive one.

“The first day I did cry, but I met so many people here, I haven't met one rude person yet, and I've met so many friends,” Antley said. “So, I think it’s going to be fun. I mean, I'm still getting adjusted, but it's a good change.”

Two weeks before the rest of his class arrived on campus, Luke Larkin was at Flagler to start training with the cross country team.

Larkin, who was state champion in the 800-meter for track his senior year of high school, said Flagler felt like a natural choice during the college recruiting process.

“Flagler was where I felt the most wanted, and I felt connected with the team and the coaches the best,” he said.

He said the demanding schedule he’s had for the past month has actually helped him bond with his teammates.

“We wake up every day at six ‘clock and, and go to practice at 6:40 or whenever we start and we've been doing it for four weeks now,” Larkin said.  “You get to see the team every single day and they're all super good dudes and they all want to see you succeed and they want the best for you.”

In their downtime, Larkin and his buddies head to the beach, play some Spike ball, watch movies, get homework cranked out or, as of recently, set up a few chess boards and get a few matches in.

“Kind of just the normal stuff that you do when you live in Florida,” he said.

Larkin said despite both of his sisters being FSU students, he and his parents knew Flagler was the right choice.

“This is really where I felt like God wanted me to be, was in St. Augustine,” he said.