Martin and DeLaughter retiring, looking forward to the future

Professor Don Martin finishing here, but already starting “something else”

For forty years, Don Martin has been a full-time teacher and a part-time artist. With retirement now on his immediate horizon, he is able to switch his focus to becoming a full-time artist. “I wanted to quit while I still enjoyed it [teaching],” Martin said. “As soon as I finish, I start something else.” That something else is a full slate of exhibitions to begin in the fall and go into the winter with a show at the Ormond Beach Memorial Art Museum & Gardens in October followed by a two-week artist-in-residence program at Barton College and another exhibition at Georgia Southern University spanning into 2019. He will continue to judge local art shows, keep tabs on previous students who go on to exhibit and create in well-known projects, as well as take advantage of his studio. He paints a picture of a well-loved outbuilding behind his home where he and his dog escape into their own art world and are free to create. After 40 years at Flagler, Martin insists he is sticking around while he works on his artistry. Martin states, “I still plan to be a part of the family here.”

You can follow along on social media with students and alumni as they post goodbyes and fond thoughts for Don Martin using the hashtag, #DonMartinLegacy. 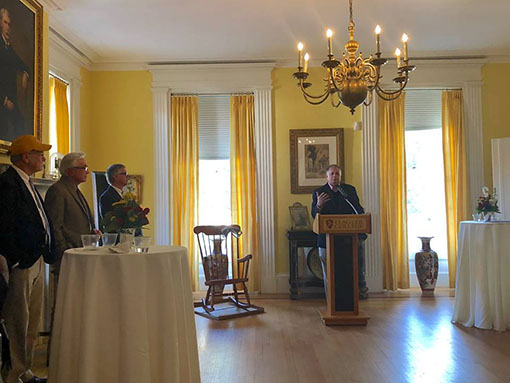 Although his plans for the future are not yet set in stone, the beloved professor reassures his Flagler family, and himself, that God works in mysterious ways and says that while this one door may be closing, “the one that stays open will be the one I know I’m suppose to go in.” Once named a "Who’s Who in the World" and a "Who’s Who in America", Doc is not your typical business or marketing professor. He was a self-proclaimed “frustrated architect” until Florida State University recognized his passion and penchant for both management strategies and marketing and finally offered a degree program to marry those previously-uncombined disciplines together: strategic management and marketing. Since receiving his doctorate, he has taught a variety of courses covering a range of marketing and business topics including ethics, strategy and research to an estimated fifteen thousand students but concedes he “stopped counting years ago.” He has worked as a farmer for his father-in-law, at a Mississippi Chamber of Commerce, as a factory worker, as a PR manager for the Republican Party during the 1972 election season, and as a radio show personality. He earned the DJ name of “Scott Love” during his stint in radio, is proud to proclaim that he was consistently number one in his time slot, and aimed to be Johnny Carson’s replacement. His myriad of jobs shows his curiosity to try new things and one can tell in a short conversation with him that he is an eager learner. With inspiration from a former mentor, he explains his future and his eagerness to try something new in this way: “only the lead horse gets a change in the scenery and I’m just changing my lead horse.”