In sunny Loma Linda, California, there is a community of people who live decades longer than the average American. Fascinated by this concept of longevity, Flagler College student Maiya Mahoney spent the past summer investigating the cause of this phenomenon as part of a Pulitzer Center grant. 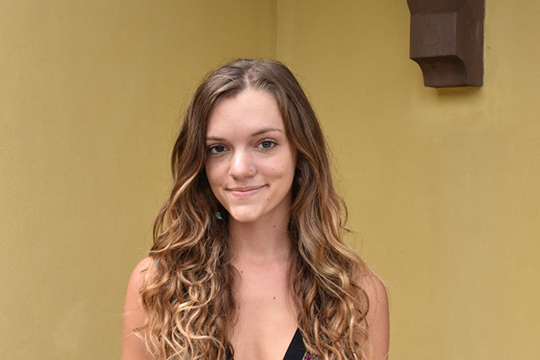 Mahoney, a senior majoring in Journalism with minors in Graphic Design and International Studies, took the Pulitzer grant class offered at Flagler and was able to travel to Loma Linda for the project titled “The Secret to Longevity: Loma Linda.” It was there she gained valuable experience as a journalist.

Mahoney, who is co-editor of College’s online student newspaper, The Gargoyle, focuses on what is called a “blue zone” in Loma Linda, California, made up of Seventh-day Adventists, and how their spirituality correlates with their long lifespans.

“Blue zones are basically areas around the world, where people are living longer and healthier,” Mahoney said. “There are five blue zones in the world, and the blue zone in Loma Linda is the only one in the U.S.”

Many of these blue zones have residents who live well over 100-years old, and the medical community attributes this to healthier lifestyle habits such as diet. However, Mahoney found that the residents of Loma Linda had a more spiritual reason for their long lives.

“What was different about Loma Linda was that their longevity had a lot to do with their religion,” Mahoney said. “A lot of my studies found that religion can affect longevity.”

Mahoney traveled to California, spoke with members of this community, and gained insight into how and why they live such long lives.

“For a lot of us, we think of health as our physique or what we eat, but it is so much more than that,” Mahoney said. “It’s also our spiritual, mental, and psychological well-being, so the articles that I wrote touched on that.”

Mahoney says that she was inspired to cover blue zones by the Netflix show, “Down To Earth with Zac Efron,” where, in one episode, Efron goes to a blue zone in Sardinia, Italy. “My original story idea was to go to Italy and study longevity in Sardinia, but because of COVID restrictions, I had to look at other options. Luckily Loma Linda was a blue zone in California,” Mahoney said.

Mahoney was in the Pulitzer class with about 15 other students in the Spring semester of 2021. Each student pitched a story idea and budget centered on an underreported issue anywhere in the world, hoping to receive a $3,000 grant to produce the story on behalf of the Pulitzer Center.

Mahoney’s pitch won the grant money, and she was assigned a mentor affiliated with Pulitzer. “Emily Baumgartner, who writes for the LA Times, was my mentor,” Mahoney said. “She helped me find sources and assured me whenever I hit roadblocks; it was great to hear affirmation from someone who writes for such a well-known publication.”

“Seeing it all come together and write articles that I am really proud of, to do all of that research for something that I wasn’t sure was going to happen, and when I got it and could publish it on Pulitzer’s website has been really rewarding and makes me excited for future journalism travels,” Mahoney said.

Mahoney’s advice for any student pursuing a Pulitzer grant is to “be open and flexible, don’t go into your story thinking it is going to turn out a certain way, you really don’t know which way it could go, so be open to change,” she said, “write what you are passionate about, and your hard work pays off.”

The Pulitzer grant class gave Mahoney valuable experience as a journalist and gave her the confidence to pursue new story ideas.

“My mentor, Emily, told me that I have the mind of a journalist and can really be successful, hearing that from someone who is w well-known journalist at a prestigious publication was really reassuring,” Mahoney said, “After this project, I am already thinking of new story pitches that I could do that would allow me to travel.”

Follow the links below to learn more about Mahoney’s project: