Flagler College announced that Leslie Robison has been selected as the Kenan Distinguished Associate Professor of Liberal Education in Art. Her selection was among nine applicants. Her appointment will commence immediately for a term of three years. 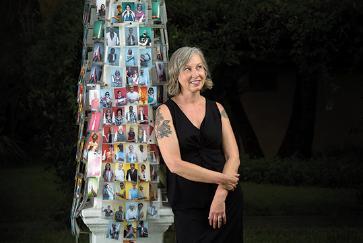 “I am, of course, incredibly humbled by this honor when there are so many faculty members making meaningful contributions to the college,” she said.

Woolfolk said in an earlier statement that having endowed professorships showed the college’s commitment to academic development.

For Robison, it’s also about the community aspect and bringing her students and their work into that fold. She sees the work she and her students are doing as “a tool for exercising empathy and creating understanding and connection.”

Woolfolk agreed, “Professor Robison’s commitment to advancing public art, interdisciplinary learning, and the engagement of her students with the community made her a perfect choice for this honor,” he said.