Nearly 150 Flagler College students clutching candles and posters while chanting “People Unite Take Back the Night” marched against sexual assault Thursday night, as part of the school’s third annual “Take Back the Night” event. Held on campuses throughout the world, the event raises awareness of and calls for an end to sexual violence of all forms.

“Sexual assault happens whether people believe it or not,” said Colleen Turkiewicz, student chairperson for the event. “By coming, people are increasing their awareness for sexual assault and standing up against it. Take Back the Night is where everyone can come together and stand up for themselves and say that they will no longer be victims, but survivors.”

Turkiewicz was one of the many Flagler students participating in the night’s events, from writing inspirational letters to other survivors and handing out teal beads for all attendees to wear, to painting students’ handprints on a board to take an empowering stand against sexual assault. The college’s counseling center and the local domestic violence support organization Betty Griffin House were also available for support. 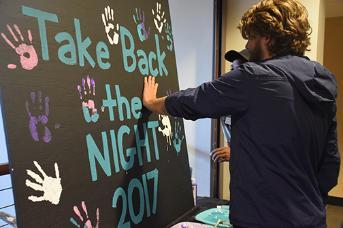 “Take Back the Night symbolizes a commitment to end sexual assault,” Betty Griffin volunteer Katelin Maloney told the crowd in the college’s Virginia Room. “Everyone needs to be involved in this prevalent issue. But this night, this full room gives me hope that young people on campuses can be safe. Just remember you survived, and that makes you a survivor.”

A “Special Victims” unit detective from the St. Johns County Sheriff’s Office noted ways in which people can prevent sexual assault from happening, including being aware of one’s surroundings, paying attention to others, and monitoring one’s social media accounts. After the event’s guests spoke, the students and staff members shared their flames from candle-to-candle in a ceremony to create a supportive community as they “took back the night.”

Students then headed to the streets — specifically down King Street, to Cordova and Valencia Streets and back around to Sevilla Street — chanting “No means no!” and “Yes means yes!”

“We want students to take away empowerment and a call to action after this event,” said Michelle Holland, event facilitator and director of Residence Life. “It is an event to raise awareness, and at the same time we want those who attend to think about what they can do to make our campus safer for everyone.”

According to the non-profit organization Take Back the Night, the foundation serves to create safe communities and respectful relationships through awareness events and initiatives. They seek to end sexual assault, domestic violence, dating violence, sexual abuse and all other forms of sexual violence. One in three women and one in six men worldwide experience some form of sexual violence. Less than 50 percent of victims report these crimes.

To end the night, students gathered outside the school’s Ringhaver Student Center to sing Kari Kimmel’s “Where You Belong,” and to blow out their candles as one. Flagler’s “Take Back the Night” was co-sponsored by the Career Development Center, Residence Life, Alpha Delta Kappa, Campus Activities Board, Flagler Softball, Flagler Dance Club and Glee Club. 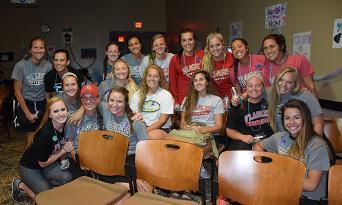