Six passionate members of the Flagler College community are actively working towards one common goal; protect sea turtles in Northeast Florida through thoughtful research and a desire to fuel their curious minds. 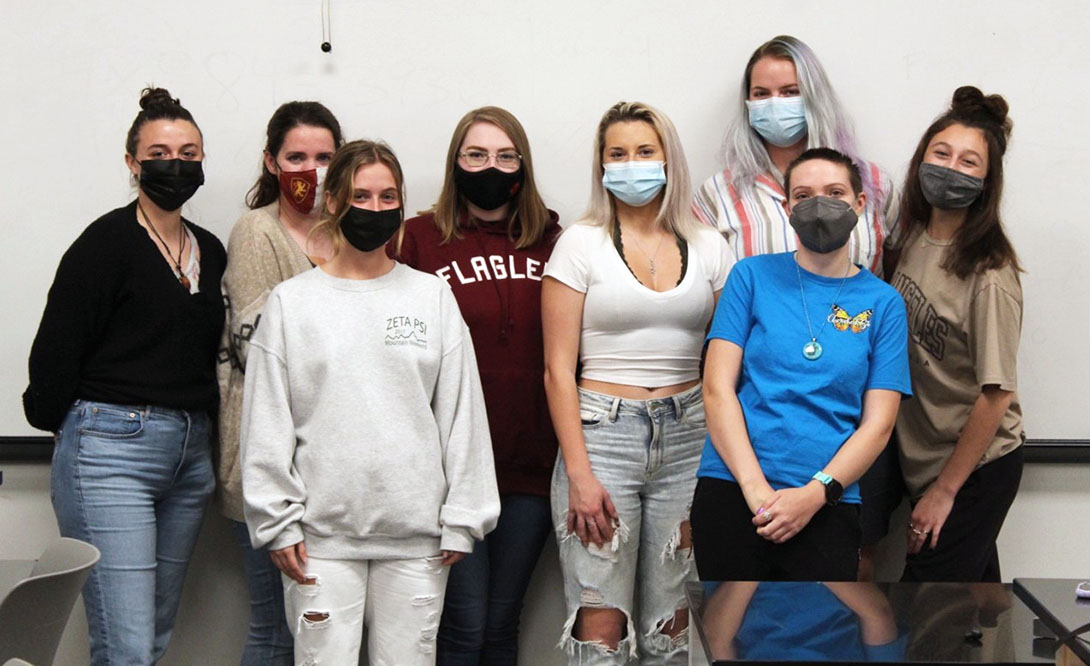 Students Avery Cogley, Trisha McCaul, Erin Buell, Leslie Palmer, and Lilli Longo jumped at the opportunity to conduct research alongside Dr. McGinley. While the project's goal has always been to find answers to research questions outlined by Dr. McGinley, the students discovered more than they could have ever anticipated about local turtles and potential policy changes.

Avery has been involved in the research project since September of 2020. Having worked with sea turtles in a different volunteer capacity, Avery was especially excited to begin working with a population in the St. Augustine community.

"Currently, we have a handful of volunteers walking the Camachee Cove Marina and Conch House Marina docks to gather a population estimate for the sea turtles that forage or eat off the side of these structures. We can establish these structures as an official foraging ground if the population is large enough! It would be so amazing to do that, as man-made structures are not normally what these guys feed on. But, if we can establish that, then there is a hope to have future conservation efforts in these areas, such as QR codes to educate the local marina dwellers," Avery stated on her involvement in the project.

For others involved, like Leslie Palmer, the project provided them with a unique peek into the environmental science field and showed them what to expect after graduating from Flagler College.

Leslie Palmer said, "It really helps me gain real-world experience in research science and reminds me that I have chosen the right path. I truly enjoy every part of working on this project; however, my favorite part is the relationships I've made with the other students involved and with Dr. McGinley. It's like a little sea turtle science-loving family! We have exciting plans to expand this project through presentations. I am going to continue with it until I graduate, and likely after that!"

Dr. McGinley's research project has given students like Erin Buell and Trisha McCaul the opportunity to enact real change in their backyard.

"Overall, it feels great to be a part of something that can potentially lead to policy changes at the marinas. Everyone participating in this project contributes to its overall progress and success," says Erin Buell on her involvement in the research project.

Through field surveys, the team was able to identify 154 unique turtles by taking multiple photos of a turtle's shell and head patterns. The head patterns are as unique to a turtle as a fingerprint is to a human. From there, the students label and organize the photos and use the software Hotspotter to determine if that specific turtle has been identified yet. If not, it goes towards the population count. They also concluded that turtles do not generally move between marinas.

While conducting their research, the team has discovered sick and injured sea turtles. Altogether, the participating students have helped rescue five sea turtles in coordination with Florida Fish and Wildlife Conservation Commission.

Trisha McCaul believes Dr. McGinley's research is easily her favorite undergrad research she's been involved in; sharing"it's a great way to get more connected with the larger St. Augustine community. My favorite thing about this project, beyond its professional opportunities, has been connecting with other students on a project that we're all passionate about."