Flagler College is pleased to announce receipt of a $1 million gift from Mr. Brad and Mrs. Janet Sauer. Their generous donation will increase student engagement with sports on campus by supporting Flagler’s newly-built Lacrosse and Intramurals Facility. 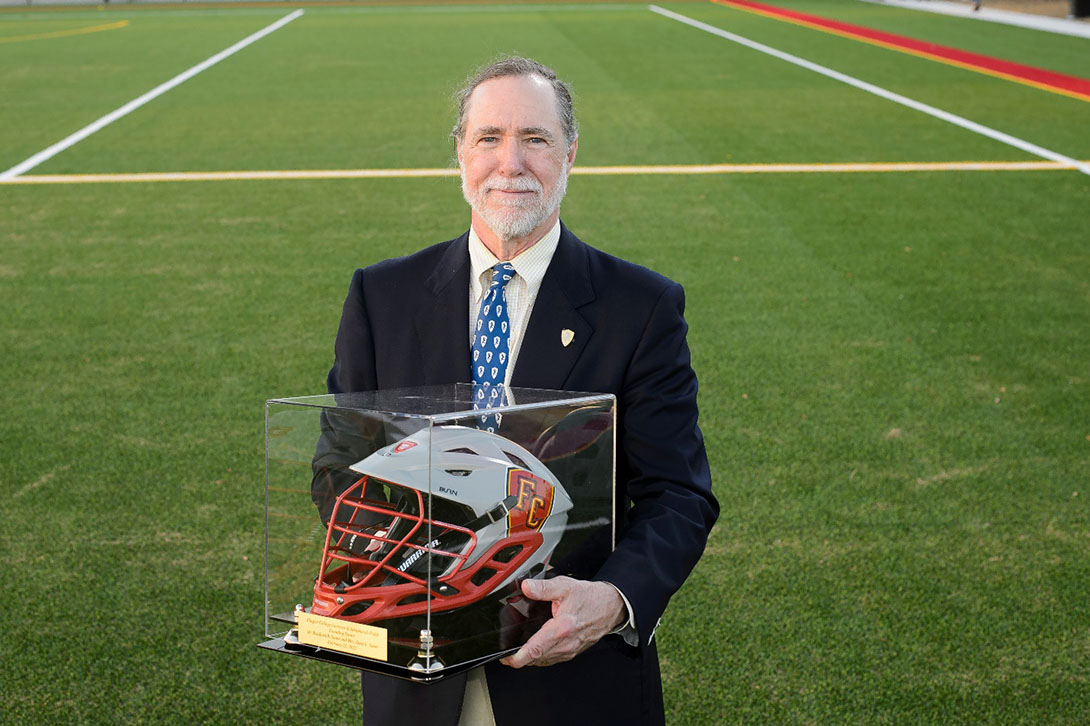 Brad Sauer at the dedication ceremony of the Flagler College Lacrosse and Intramurals Field on Wednesday, February 23, 2022.

The gift will also benefit capital projects and enhancements across campus, along with ongoing historic preservation initiatives. Mr. and Mrs. Sauer have supported Flagler College for over 30 years. Brad has served on Flagler College’s Board of Trustees since 1986 and Janet is the daughter of the College’s founding benefactor, Mr. Lawrence Lewis, Jr.

“Janet and I are delighted to be able to carry on Mr. Lewis’ legacy of progress and innovation across the Flagler campus,” said Brad. “The new Lacrosse and Intramurals Facility, as well as the capital projects and restoration plans developed by President Delaney, are moving Flagler forward in a way that our family members are proud to support.”

Following seven years of club sport competition, this year marks the first season of Flagler College’s men’s and women’s lacrosse teams competing at the NCAA Division II level. As the Flagler College Saints bring the nation’s oldest sport to its oldest city, this donation provides a tremendous investment in the long-term success of both teams. The women’s lacrosse team hosted its inaugural home game at the new facility on February 9, 2022, with an overwhelming 25-4 victory over the visiting Webber International Warriors.

Jud Damon, Director of Flagler College Athletics, said, “We are incredibly grateful for the support Mr. and Mrs. Sauer are providing to our lacrosse teams. This allows us to provide a first-class facility for our student-athletes, while enriching the Flagler College experience for hundreds of other students participating in our intramurals programs.”

In addition to the Lacrosse and Intramurals Facility, the gift will significantly impact planned capital enhancements at the College. It will also support ongoing historic preservation efforts of facilities across campus, such as the former Hotel Ponce de Leon, which is now a residence hall for Flagler College students and a main attraction for St. Augustine visitors.

“We are extremely thankful for the donation put forth by Brad and Janet,” said Flagler College President John Delaney. “It is an exciting time to be a part of Flagler College, with new athletics offerings and investments being made in our capital projects across campus. Their gift will have a lasting impact on our students, facilities and community. The entire Flagler family wholeheartedly appreciates the Sauers’ leading commitment toward cultivating a vibrant campus community at the College.”