Flagler College dedicated its newest residence hall in honor of former President William T. Abare, Jr. on Oct. 25 with a ribbon cutting. The building, named Abare Hall, is part of a $23 million complex on Malaga Street adjacent to the FEC Residence Halls on the banks of St. Augustine’s San Sebastian River. It houses 159 students in 75 suites.

Abare (pictured below), who attended the ceremony and will serve as president emeritus at the college, served as president for 16 years and an administrator at the college for 46 years before retiring this past June. The dedication and ribbon cutting was attended by the Flagler College Board of Trustees, administrators, faculty, staff and students, as well as project leaders for design and construction. 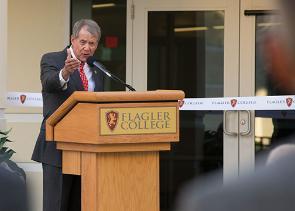 Abare Hall is part of a complex that features a 551-space parking garage and an 18,900-square-foot, two-story Commons building that connects it to the existing FEC Residence Halls. The new hall officially opened to students in mid-August, in time for the fall academic semester.