The Crisp-Ellert Art Museum (CEAM) and Flagler College welcome Sasha Wortzel as the CEAM Artist-in-Residence from Oct. 5-15, rescheduled from last spring. During her visit she will engage with Flagler College students, faculty, staff, and the St. Augustine community through virtual class visits and visits to local historical sites. 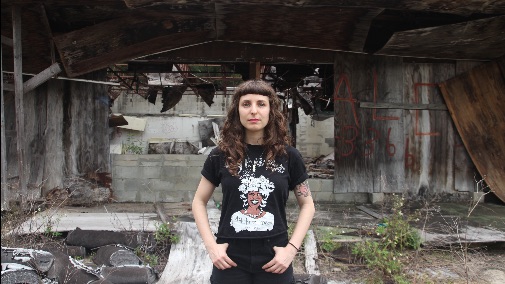 On Thursday, Oct. 8 at 5 p.m., CEAM will host via Zoom here a virtual screening of four of Wortzel’s short films, including “This is an Address” (2020), “Somewhere between” (2019), “Happy Birthday, Marsha!” (2018; co-director Tourmaline), and “We Have Always Been on Fire” (2018). The screening will be followed by a Q&A between Wortzel and Flagler College Kenan Distinguished Professor of Art Patrick Moser.

Born and raised on the coast of southwest Florida, Sasha Wortzel (she/they) is an artist and filmmaker working between New York and Miami. In 2019 Wortzel relocated to South Florida to continue developing a feature length version of her short film “Somewhere Between,” entitled “River of Grass” about the Florida Everglades. The film is described by the artist as “a time traveling guide channeled by the land recounts the Everglades’ violent past and warms of Florida’s precarious future.” Told through the lens of the environmental writer Marjory Stoneman Douglas’s book “The Everglades: River of Grass” (1947), the film explores how Florida’s vulnerability to climate change is historically rooted in the Everglades’ ongoing legacies of colonization. Wortzel received generous support from the Sundance Documentary Fund and Field of Vision.

Wortzel’s films have been screened at the Museum of Modern Art’s DocFortnight, True/False Film Festival, DOC NYC, BAMcinématek, Blackstar, Berlinale, and Sharjah Film Platform. Their work has been exhibited at the New Museum, Brooklyn Museum, The Kitchen, New York; Hirshhorn Museum and Sculpture Garden, Washington, D.C.; Krannert Art Museum, Champaign; and SALTS, Birsfelden. Wortzel has been supported by the Sundance Institute, Art Matters, Field of Vision, Queer/Art/Mentorship, and a 2018 NYSCA/NYFA Artist Fellowship in film/video. Wortzel has participated in residencies including the Lower Manhattan Cultural Council Workspace Program, Abrons Arts Residency for Visual Artists, Watermill Center, New York; and AIRIE (Artists in Residence in the Everglades), Florida. They are a 2020 studio resident at Oolite Arts, Miami Beach. Wortzel’s film “Happy Birthday Marsha!” (2018; co-director Tourmaline) won special mention at Outfest and is distributed by Frameline. Their work is in the permanent collections of the Brooklyn Museum and Leslie Lohman Museum of Art. She has been featured in publications including The New York Times, Artforum, Art in America, and New York Magazine. Wortzel received an MFA in Integrated Media Arts from Hunter College.

The CEAM Artist Residency, in collaboration with Flagler College’s Department of Art & Design, is a regular program of artists-in-residence to engage in themes of place-making while collaborating with some aspect of St Augustine’s local community, the city’s significant and varied roles in American history, or its rich natural environment.

The CEAM Artist Residency is supported by a grant from the Dr. JoAnn Crisp-Ellert Fund at The Community Foundation for Northeast Florida.

The CEAM is currently closed to the public. More information about virtual programming, including a 3D virtual tour of the CEAM space is available on the website at www.flagler.edu/ceam. You can also follow on Instagram (@crispellertart) or Facebook (Crisp-Ellert Art Museum) or contact Julie Dickover at 904-826-8530 or crispellert@flagler.edu. To directly link to the virtual tour of the museum, please visit here.