After a year and a half delay, Flagler College Theatre Arts students are finally set to take the stage with their first musical production since 2019, and long before the COVID pandemic. 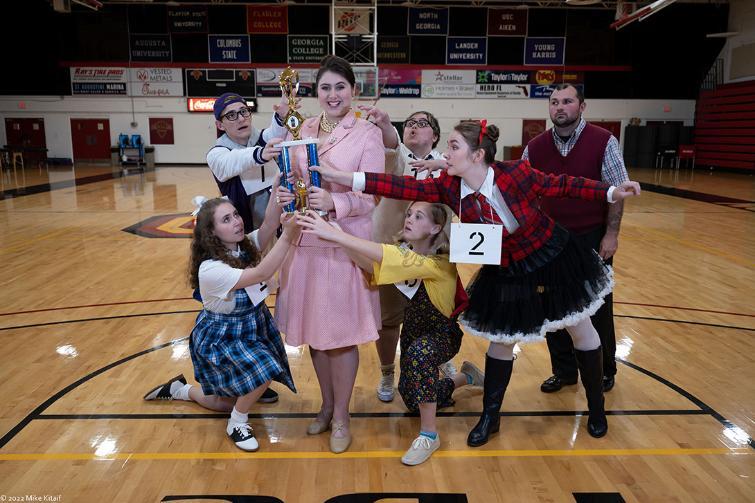 They will return with the Broadway musical “The 25th Annual Putnam County Spelling Bee” on March 2, a comedy that chronicles a middle school spelling bee and has college students playing the roles of kids half their ages.

But as they run through final rehearsals and fine-tune scenes, many in the cast say the long delay and uncertainty brought on by the pandemic has made this production more than just another college musical.

For them, it has become a chance to rediscover a passion for theatre, the thrill of performing in front of a live audience again, and a new appreciation for being in the spotlight.

“I think it is re-finding the love of performing,” said sophomore Theatre Arts major Michael Clifton-Plumber, who plays three roles in the show. “To be able to connect with a person and physically touch them. Or to be able to smile with your full expression. To feel the lights on your whole face. It’s just such a different energy. We just felt so dead and cutoff from the craft (during the pandemic.) I’m just very excited to be back where we started.”

The musical comedy, directed by Theatre Arts Assistant Professor Leah Page, is a comical look at socially-awkward students who find joy, heartache, purpose and even a sense of community through their competition.

“(The show) has brought us all together,” said freshman Angelica Parisen. “Some of these people are my best friends. It has really helped us form those connections. It’s one of those shows that is about a bunch of misfits who don’t really fit together, but then they come together to reach a sort sense of community.”

A Musical for the Right Moment

Page said the show was originally picked in January 2020 with a performance planned for October of that year. In hindsight, she said the Putnam County’s themes of community and togetherness made it a fitting choice for today as the country emerges from the pandemic.

“It feels like the right moment,” she said. “We can finally come together, and it’s a show where the audience can feel like they’re part of the show through interactive qualities that help to remove the audience wall. What a time to make this happen.”

It’s a sentiment not lost on the rest of the cast, who also see the similarities between the show and the age they’re living in.

“The resiliency of the kids we’re playing is so phenomenal to me,” said Montgomery Pendleton, a Theatre Arts senior. “Some of these kids have been through everything, yet they’re still able to be kids and be goofy and live through it all, which is really inspiring to me.”

For several of the younger performers, they’ve never even had the chance to be in, much less see a Flagler performance. Page said about several Theatre Arts professors taught online in the fall of 2020, and that made it harder to work with students and really create those experiences that can only be found on stage and interacting with other actors.

“It was difficult trying to perform in masks or socially-distance when it runs so counter to what theatre is,” she said.

For sophomore Jessica Griffin, the pandemic made things difficult as a college student whether on or off the stage.

“Last year was not a good year for anyone. It was just a really hard time in so many ways,” she said. “It just felt so weird not to see anyone’s faces or facial expressions. I felt really disconnected from everyone.”

But for her, it’s been a night and day change as restrictions began to loosen and they got back to rehearsing and preparing to finally put on the show.

Excitement, and hard work, under the lights

Page said getting back on stage has been rewarding and exciting for the students, but that she is most impressed by their level of effort and dedication, not to mention how they’ve dealt with the pressure.

“Honestly, it’s hard,” Page said. “I think Theatre students are some of the hardest working students on campus, and they don’t always get the credit they deserve.”

Many are taking full course loads, working part-time jobs and then also showing up night after night for 3-hour rehearsals.

“Sometimes going to rehearsal can be like, ‘Ugh,’” she said. “We think theatre is fun and joy and perfect and wonderful all the time, but it’s hard and sometimes we don’t want to do it. But then we get in the room together and we are reminded of why we’re there.”

Clifton-Plummer said there’s definitely a bit of nerves as opening night approaches, but he knows they’ll go away once they get back on stage, the lights come up and they start to feel the audience’s energy.

“Once we get that feedback, and are able to see the audiences’ faces, it’s just going to come out of us,” he said. “There’s not even going to be the thought of whether you’re scared to do it, because you have to do it. You want to do it.”

The show’s Music Director is Clinton Weinberg, a Flagler faculty member and director of the Flagler College Pep Band.

The show runs March 2, 3, 4, 5 at 7:30 p.m., and March 6 at 2 p.m. at Flagler’s Lewis Auditorium, 14 Granada St. Tickets are FREE for faculty/staff/students and their immediate family. The general public can purchase tickets at flagler.universitytickets.com. For questions about the show, call the box office at 826-8600.