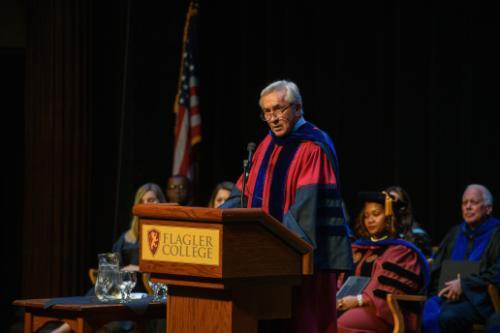 After serving as Flagler College’s dean of Academics since 2007 and numerous accomplishments, Alan Woolfolk said he felt it was the right time for him to retire and pass the torch.

"I am honored to have served as Flagler’s chief academic officer for the past 13 years,” he said. “I am grateful for the support given to me by Presidents Abare and Joyner in building the faculty, staff and academic program during my tenure."

Woolfolk, who was vice president of Academic Affairs and dean of the Faculty, helped transform the College’s academic program and raise the level of student achievement in numerous avenues.

But Woolfolk said the college’s successes were not something he could take credit for solely.

“Together I think we’ve done a great job on many things, and I do mean together,” he said. “I’ve been around the academy long enough to know you can’t do anything by yourself.”

Woolfolk said he was proud of a great many College accomplishments during his tenure, and maybe most of all not just growing the number, but also the quality of the faculty. He also oversaw the expansion of new staff and academic support offices including the Center for Advising and Core Experience, the Adult and Continuing Education program, the International Center and many others.

Tagged As
Next Article