Owen McCaul, a Champion for the Blind and Visually-Impaired

When Owen McCaul, '85, was named chair of the Board of Trustees at the Florida School for the Deaf and the Blind, he not only continued his role as an active leader for the blind and visually-impaired. For the St. Augustine public school for Pre-K through high school students, he also was the first blind or visually-impaired person to serve as board chair and the first FSDB alumnus (class of 1982). 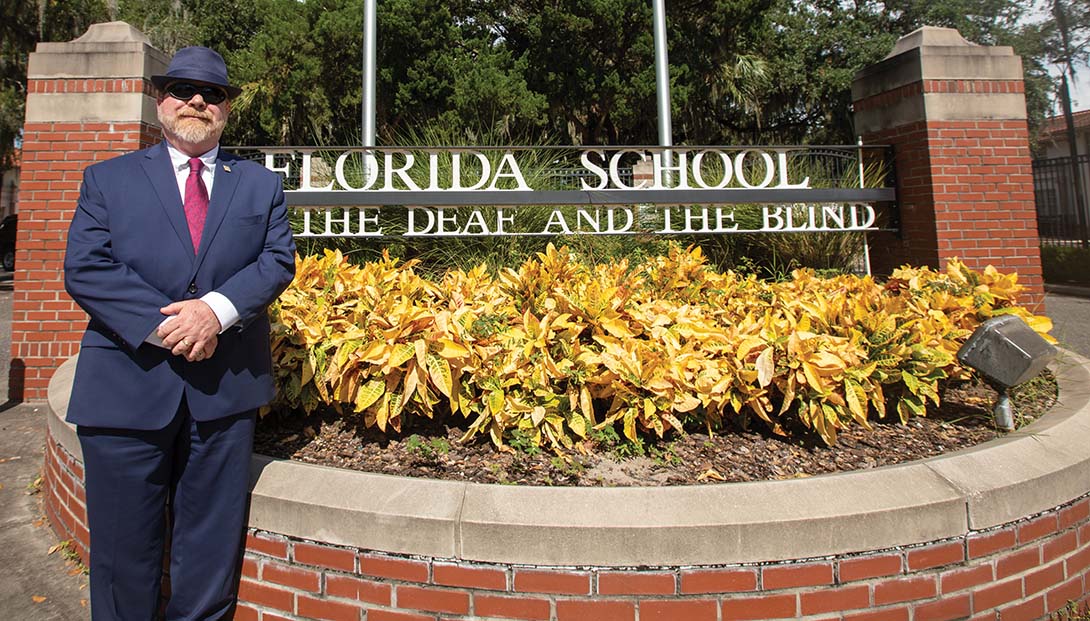 Flagler College Alum, Owen McCaul, stands next to the sign for the Florida School for the Deaf and the Blind

McCaul was first appointed a trustee at the school in 2006 by Gov. Jeb Bush, and then served as vice-chair for nine years prior to his current position. He has also served on the City of Tallahassee's Transit Advisory Council, committed to improving city bus access, and is currently a member of the board of directors at the Lighthouse of the Big Bend, which provides services to individuals with vision loss in the northwest part of Florida.

It's all in addition to his regular work as an assistant state attorney in Leon County since 1989. McCaul is general counsel for State Attorney Jack Campbell of the 2nd Judicial Circuit of Florida (Leon, Gadsden, Jefferson, Liberty, Wakulla and Franklin Counties). He represents the state in Leon County Felony Drug Court, Baker Act hearings and in many extradition matters. He also represents the State Attorney's office on Leon County's Criminal Justice Coordinating Committee and the Public Safety Coordinating Council.

McCaul studied at Flagler from 1982 to 1985, graduating in just three years with a bachelor's degree in Psychology.

Prior to his college career, he was often picked on for the thick glasses he wore due to his extreme nearsightedness, otherwise referred to as high myopia, which makes it difficult to see anything more than a few feet away from the face. So, he begged his parents to let him transfer to the Florida School for the Deaf and the Blind, a decision he believes set him on the right path.

“There is no question in my mind that FSDB was the right choice,” he said. “It served as the foundation for my success in college and career as an attorney.” There he met former Board of Trustees member and President of Flagler College, William L. Proctor, who recognized his promise early on.

“I was delighted when he was appointed to the FSDB Board of Trustees and extremely pleased to learn of his election as board chair in 2019,” Proctor said. “We at Flagler College take considerable pride in Owen McCaul's many accomplishments. As a former chair of the FSDB Board of Trustees myself, I am honored that we share a common legacy.” McCaul largely credits Proctor for encouraging him to pursue his bachelor's degree at Flagler.

“When I told Dr. Proctor that my blue-collar family simply couldn't afford the tuition for a private college like Flagler, he assured me that grants and scholarships were available to well-qualified applicants,” he said.

McCaul was highly successful at Flagler, immersing himself in everything the College had to offer. He became enamored with lectures outside of his field of study, attended any play, concert or reading he could, volunteered with the Special Olympics, and even took Tang Soo Do (karate) classes from Proctor.

His path led him towards a career in law rather than psychology, but he feels that his experiences at Flagler led him to where he is today.

“While I wound up going into law, my time at Flagler provided experiences which proved to be invaluable later in life. I am especially thankful for Dr. Proctor, Mrs. Dillon, and the late Professor Doug Taylor and Dean Robert Carberry for encouraging me to consider law school.”

“We have a great picture of her, grinning in the college dining room, after her campus tour. Her mom and I joke that we knew at that moment she would choose to go to Flagler," he said. "It has proven to be a wonderful choice for her, as well. I knew from my experience at the college that Flagler would give her an opportunity for personal growth.” Following in his footsteps, his children Ian, 17, and Trisha, 20, have done their part to support FSDB as volunteers at alumni events.

McCaul's years of dedication to the blind and vision-impaired was recognized last year when he was selected by the American Foundation for the Blind as one of 16 mentors across the country to be paired with a young blind or visually-impaired person just entering a leadership position. He hopes to positively impact young people, especially those interested in pursuing law. He says to them, “It will be harder than you think it will be. But buckle down, do the work. You will have to work harder than others. Get used to it.”

It's all part of his passion and commitment, and one that is incredibly strong for FSDB. “I will always be a staunch supporter of the school's mission to enable students to do more, be more and achieve more,” he said.