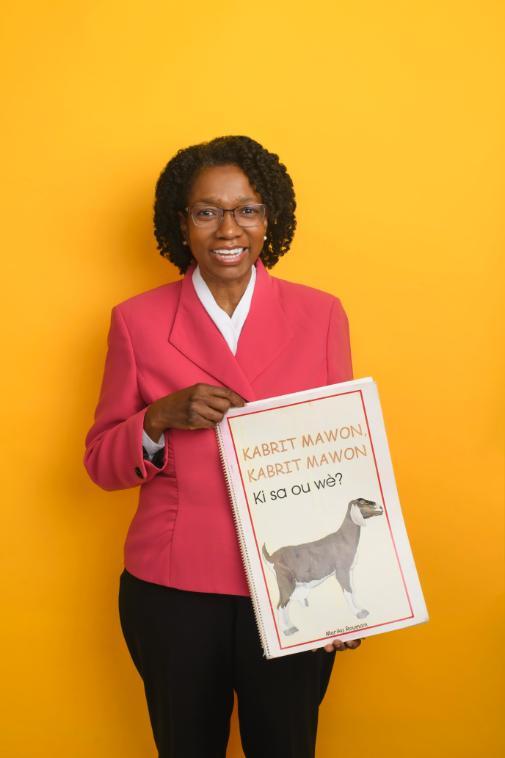 Seven-year-old Edwidge Bryant stood before a blank canvas in the back of a classroom in Brooklyn, N.Y., lost in he daydreams of all that was left behind in her beloved country of Haiti. She had been separated from the other students, who were adding and subtracting numbers.

Bryant, too, could add and subtract, but didn’t speak English. Her teacher, baffled by the perceived incongruity, “didn’t know what to do with me,” she said. “I remember how I felt. Alone and invisible.”

Isolation, an easel and paint brushes became her instruments of learning and continued for a year after she moved to Brooklyn. Her father, a lawyer and math professor, decided to intervene and taught Bryant and her siblings English skills for two years, in the evenings and on the weekends, leaving no time for the Bryant children to play stick ball or dodge ball games with neighborhood friends.

These memories, among others, planted the seed for the Flagler College associate professor of Education’s latest project in her home country. There, she is the co-director of the literacy program AKA (Agrikilti, Kominote, Alfa) in Petit-Goậve. She collaborates with other directors to translate primary school textbooks into Haitian Creole, the Haitian students’ native language. Bryant, through the publisher Educavision, will distribute translated textbooks to students in kindergarten through the sixth grade in the Haitian town of Piton. And that’s just the start.

“Based on student performance data from that change, and with the Minister of Education’s approval, we’re hoping to then distribute textbooks to all children throughout the country in the fall of 2021,” she said.

A Reversal in Pedagogy

The idea surfaced in 2010 after Haiti was hit hard by an earthquake. Bryant and two colleagues went to Haiti in 2011 to conduct a needs assessment and learned that students were not passing standardized tests. While Haitian Creole and French are both the country’s official languages, the medium of instruction remains to be French in many schools. This is a problem, Bryant said, because children’s native language — the one spoken at home — is Haitian Creole and yet school materials and tests are administered in French.

Many students struggle to understand the content because they are acquiring conversational and academic French simultaneously – in other words, they have not yet developed oral proficiency in French, yet are expected to read and analyze academic content in French. Fast forward years down the road, and those same students don’t pursue college degrees — not because they are not committed to their education, but because they are unable to successfully pass the various standardized assessments. Haitian students, she noted, raised in homes where French is spoken, often do well on standardized tests written in French, and complete their college education successfully.

“We’ve had it backwards for a number of years,” Bryant said. “The majority of the country is monolingual Haitian Creole speakers, so the first time many students are introduced to French is in school. Because it’s introduced for the first time in schools, it should be taught using second-language strategies while using Haitian Creole as the language of instruction in all subjects.”

The French language was designated as the primary medium of instruction, she added, because of a perception of status.

“The attitude is that French is perceived to be a prestigious language,” she said. “Even Haitians who are monolingual say that they don’t speak Haitian Creole. They say they speak French. In the U.S., (Haitian) children are asked what they speak, and they say French. Then the resources are provided in French and they can’t understand them.”

Bryant recalled her years of working in New York as a bilingual teacher, and emphasizing to Haitian parents the importance of telling schools that their children did not speak French so teachers could develop a solid bilingual program.

The idea is not that students won’t learn French at all, but that they will do so when they are developmentally ready —an approach anchored in second language acquisition theory. According to the Flagler professor, students acquire a second language much faster and more easily when they are proficient in their native language.

Students will get better at French if they get better at Haitian Creole,” she said. “Research supports this. Students who have a strong command of their language and come to the U.S. to study go straight to the top because they already have a grasp of how language works.”

A seismic change to language education of this scale, in Bryant’s opinion, requires widespread support. To this end, she and Haitian colleague

Samuel Pamzou have engaged in outreach efforts throughout Haiti, and within a U.S.-based community with a large Haitian population—Palm Beach County, Fla. As a result of her work on Palm Beach County’s Dual Language Committee, the district is in the process of developing a Dual Language Program in Haitian Creole/English. Pamzou has been spearheading forums in Haiti, and Bryant said the feedback has been positive.

“Samuel receives standing ovations,” she said. “People have gotten up and clapped and said, ‘Finally! Now, our children will understand what they’re being taught.’”

Bryant and Pamzou have also been translating textbooks for social sciences, math and history subjects from French to Haitian Creole.

“I do believe that this will help move our country (Haiti) forward,” Bryant said. “If you don’t provide resources for addressing this problem, then the problems will remain problems. Haitian students are brilliant and make great use of the limited resources they have. They can do even more when allowed to analyze as deeply as one could in a language that’s their own.”

At Flagler, Bryant is also the English for Speakers of Other Languages (ESOL) coordinator and teaches classes such as Cross Cultural Communications, which   exam- ines cultural diversity in the sociopolitical, cultural and linguistic contexts of teaching, learning and living in a global society. In Applied Linguistics, she teaches students to have a fundamental understanding and appreciation of cultural diversity.