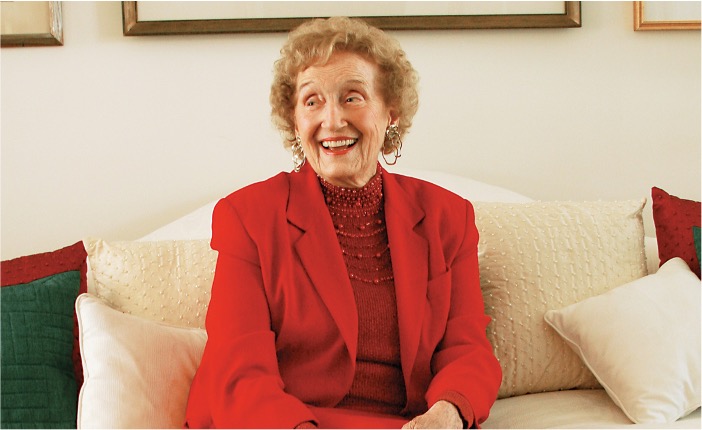 Dr. Frances Bartlett Kinne’s connection to Flagler College extends back before this historic campus even hosted students. A resident of St. Augustine since 1958, she used to eat with her husband in the Hotel Ponce de Leon dining room, years before the college was founded.

Throughout her long career in education – one that includes being the first female university president in Florida as head of nearby Jacksonville University – she later forged lasting connections with the young College, forming close relationships with its administration, faculty, staff and especially students.

In fact, in 2003 she funded the Dr. Frances Bartlett Kinne Endowed Scholarship at Flagler to support students who had been members of the National Honor Society in high school, and demonstrated exemplary character, service and leadership.

It was a bond built on a mutual love for education and selfless service to others.

“My whole theme has been this: that life is not about me, it’s about others,” she once said.

Kinne, who passed away in 2020 at the age of 102, will continue helping others at Flagler thanks to an additional gift of $100,000 for scholarships through her estate. Understanding the importance of supporting the ongoing development of the young College and enriching educational opportunities for future students, Kinne was one of the inaugural members of the Henry M. Flagler Heritage Society. The Society recognizes individuals who name the College as a beneficiary of a bequest, estate plan or other planned gift.

Late last year, Kinne’s godson, Eric Nelson, presented Flagler President Joseph G. Joyner with the gift that will be added to the endowed scholarship fund that bears her name. To date, eight students have benefitted from the scholarship.

“Fran was a multi-talented pianist who could play by ear as well as ‘play the ink’ as the saying goes,” said Nelson, both her godson and cousin. “But for all her many talents and accomplishments, perhaps the most inspiring is how she treated everyone with the utmost respect and dignity, regardless of their position. She was genuinely interested in everyone around her, and always had encouraging words to share.”

A distinguished educator, Kinne dedicated more than 60 years to Jacksonville University, serving as president from 1979-89, Chancellor from 1989-94 and Chancellor Emeritus until her passing.

Throughout her life, she was a woman of many firsts. In addition to being the first woman to lead a university in the state, she was also the first female chairperson for the Independent Colleges and Universities of Florida, of which Flagler is a member.

At Jacksonville University, she established the Davis College of Business, the Keigwin School of Nursing and an Aviation program. Over the years, she also formed close relationships with celebrities and public figures that she drew to Jacksonville, including President Gerald Ford, Bob Hope, Jack Benny and Charlton Heston, among others.

She began her Jacksonville University career in 1958 as a humanities professor, and then became founding dean of JU's College of Fine Arts in 1961, another of her many firsts and in which she served until being named president.

Kinne received undergraduate and graduate degrees from Drake University and a tri-major doctorate (philosophy, music and English literature) from the University of Frankfurt (Germany). She was awarded with five honorary doctorate degrees, including from Flagler College for her exemplary service.

Earlier in her career, she was a public school music teacher; a choral and instrumental conductor; Veterans Administration recreation director; professor at Tsuda College in Tokyo, Japan; and music consultant for Gen. Douglas MacArthur's staff in Tokyo. During World War II, she chose to be a U.S. Army hostess over the Women's Army Corps, and her wartime assignment had her in charge of providing entertainment for as many as 70,000 GIs.

Over the years, she remained active in Flagler’s funding initiatives, provided administrative cheerleading to the growing college and genuinely remained connected to all of the students she helped through her scholarship.

"What I'd really have to say is just how kind she was to people, over and over and over," said John Delaney, Flagler’s incoming interim president, as well as former mayor of Jacksonville and president of the University of North Florida. "It could be a waiter in a restaurant, it could be a 17- or 18-year- old student at Jacksonville University. She just was overwhelmingly kind.”