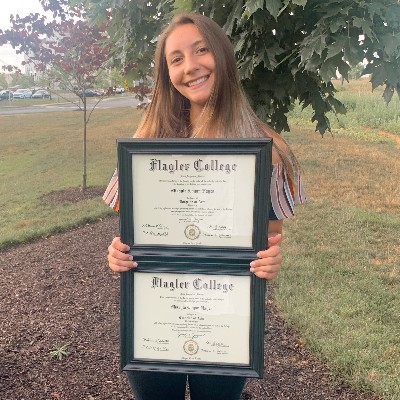 “One of the greatest opportunities that was presented to me during my time in the language department was a one-month study abroad to Spain. It was a complete cultural immersion that heightened my Spanish education and speaking skills to a new, unimaginable level.”

Born and raised in New Jersey, Hayes always planned to travel outside her home state for college. After hearing about Flagler College as a child, she dreamed of attending. Upon arriving to campus for the fall semester of 2017, Hayes was a Criminology major, but she quickly decided to advance her education in Spanish by picking up a second major her first semester. She immediately tested into a junior-level Spanish course and began taking advanced Spanish literature classes by her second year.

As a Spanish student, Hayes pursued many opportunities through the language department. Her favorite was a one-month study abroad to Spain during the summer of 2019, which allowed her to immerse herself in the culture and language. Through her close connection to Assistant Professor Aggie Johnson, Hayes also conducted a research study about the Spanish Civil War, which she used for her senior thesis.

Since graduating in May 2020, Hayes has been extended an offer with the Transportation Security Administration (TSA) as a bilingual, X-ray intelligence officer. She hopes to be placed in a New Jersey airport after her final review.

Hayes also encourages students to connect with professors, advance their education through summer courses and completing general education requirements early, and to take time for self-care. She also recommends rationing Dining Dollars and saving some for finals week.

“Flagler has provided me with an extensive amount of valuable information that I will use for the rest of my life,” said Hayes. “I feel like the education I received at Flagler was so valuable, and it makes me confident that I retained such useful and worthwhile information and skills.”