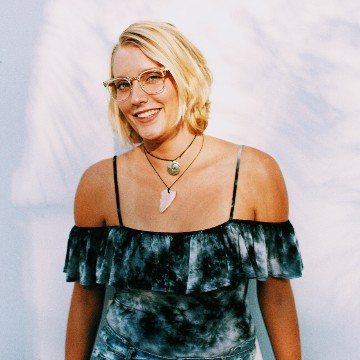 Harmony Balaun, ’19, holds degrees in English and Spanish. During her time at Flagler, she participated in the language department and study abroad programs.

I’m from a small town in south central Colorado called Salida. It’s in the heart of the Rocky Mountains. I googled “best beach colleges,” and Flagler was listed. I visited once and fell in love immediately. A year later, I was at Flagler!

What drew you to the language department at Flagler?

It’s kind of a funny story. I was looking into study abroad programs in South America, and [Professor] Aggie [Johnson] had a last-minute spot on her Peru trip which was leaving in a month. I went to Peru with Aggie, then I started taking Spanish classes, and then I wanted to go to Spain, and all of a sudden, I added a major.

What opportunities did you have through study abroad?

I went with Aggie to Spain the next summer, then in the spring of my junior year, I went to Ireland for a semester, so I studied abroad three times.

Were there any other opportunities that you enjoyed from the language department?

Through working with Aggie, I was able to work with the study abroad department, which totally enriched my life. I also loved doing Spanish and Latin activities that Professor Maguire would put on, like readings.

Where has your career path taken you since graduation?

Last October, I moved to Spain to be a teacher assistant in a rural village in Andalucia. I was completely immersed in the language, so my Spanish has gotten way better. I mostly worked with pronunciation, and I could create fun activities for the kids as well.

Have you thought about what you’re going to do next?

I’m currently working with a rafting company in Colorado. I’ve been thinking about helping with changes in digital and virtual school with the local community in Colorado. I’m also hoping to apply to a conversational Spanish instructor job through the community college.

How did your time at Flagler help prepare you for your current career path?

Flagler taught me how to work hard and do a good job. The quality of work ethic and the things we produce, especially as English majors in our writing, were far superior to anything I would’ve been able to learn at another school. I definitely feel prepared to take on a great many challenges and excel.

In Peru, I met my best friend, Juan, when we were in Machu Pichu. We weren’t really friends at this point, just on the same trip together. He bent down to tie his shoe and all these stray dogs swarmed him, like they’re gonna get something to eat. So, I shuffled through the dogs, and I was like, “Hey, leave Juan alone. Don’t bully my mom!” And after that, we were best friends!

What advice do you have for current students?

I would advise current students to work with the teachers. One of the greatest resources Flagler has that other schools aren’t going to be able to offer is the relationship you can have with professors. They are highly qualified and care about what they’re doing and who they’re teaching. If you can create substantial relationships with them, that will take you really far.

It’s okay not to understand what you’re gonna do and who you’re gonna be and what job you’re gonna have when you’re in college. It’s hard to know what the future’s gonna bring. There are so many adventures out there that you don’t even know can exist. Let the world take you where it’s gonna take you without worrying too much.