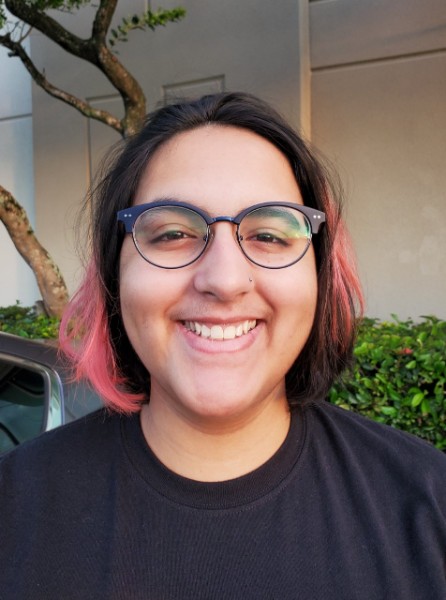 Bell Casson, ’21, is a double-major in art history and psychology. In their time at Flagler College, they have interned as a gallery assistant for the Crisp-Ellert Art Museum and attended an art-based study abroad in Berlin. Casson is also secretary of Flagler’s Film Club.

I’m from Hollywood, Florida. In elementary school, they had a big overnight field trip to St. Augustine for the fourth and fifth graders. My dad, who was working at the elementary school at the time, joined us as a chaperone on the field trip, and he was the one who remembered the college campus and told me to apply.

How did you begin working with the Crisp-Ellert Art Museum?

Professor Balaschak approached me with the opportunity to do a one-credit class helping out at the Crisp-Ellert. Julie Dickover reached out to me with the schedule, and I did 3 hours a week on Fridays.

What did you do as a gallery assistant?

At the time, they were planning for a film festival in St. Augustine. I helped Julie go through the films, mostly the international submitted films. I also learned about what goes into taking care of a museum or gallery space.

What learning or professional opportunities has this position offered you?

It helped me in terms of self-reflection. I have these two majors that aren’t the most connected fields, so it’s helping me realize what I want to do going forward. I was also asked to do the 3-credit internship program at the Crisp-Ellert for the next semester.

What made you want to attend the Berlin Study Abroad?

I saw Professor Balaschak was putting on something for art history about modern art, which is something I want to go into in the future, so I jumped at it. Germany, and Berlin specifically, has been an interesting part of the world that I have wanted to visit, but I never thought it would happen so soon. I talked to my folks about it, picked up an extra job, and went to Berlin for a week and a half.

What was your favorite part of the study abroad?

Probably Museum Island. I’m a big sucker for museums, not even just art, but history museums or natural science. I just like big places of learning. I spent literally a whole day at Museum Island.

How have your classes or opportunities at Flagler helped you prepare for your future career?

Is there anything else you want to share about your experience at Flagler?

One of the most influential things that happened to me at Flagler College was I started going to film club. I was always interested in movies, but I never watched that many growing up, so having an excuse to sit down and watch a feature-length film every week was really important for me. In film club, I met a lot of people, like my future roommate, and even joined the executive board as their secretary.