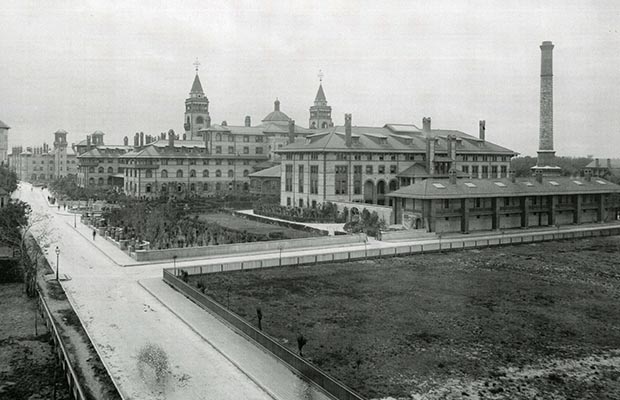 Flagler College celebrates 50 years of providing a rich, comprehensive liberal arts education in a small, supportive environment. Its heritage, however, extends back more than a century.

The college is named for Henry Morrison Flagler, a Gilded Age industrialist, railroad pioneer and entrepreneur who partnered with John D. Rockefeller to found the Standard Oil Company.

In 1888, Flagler built the Hotel Ponce de León, his first in a series of luxury resorts along Florida’s east coast. A masterpiece of Spanish Renaissance architecture and the first major poured-in-place concrete building in the United States is now known as Ponce de Leon Hall. A National Historic Landmark, it serves as the centerpiece for Flagler College.

The grand hotel launched the careers of young architects John Carrére and Thomas Hastings who are noted most for the New York Public Library and The House and Senate Office Buildings adjacent to the Capitol in Washington, D.C.  Interestingly, Carrére and Hastings, were young men right out of college when they designed the hotel.

The Edison Electric Company powered the building with steam heat and 4,000 electric lights, making the Ponce one of the nation’s first electrified buildings. Louis Comfort Tiffany is credited with the building’s interior design including the stained glass and mosaics.

Murals were completed by George Willoughby Maynard and Virgilio Tojetti.

The Hotel Ponce de León, was innovative for its time and serves as a reminder of his enterprise, diligence and commitment to high standards. The college is pledged to the preservation and use of this facility and other historic and architecturally unique campus structures.